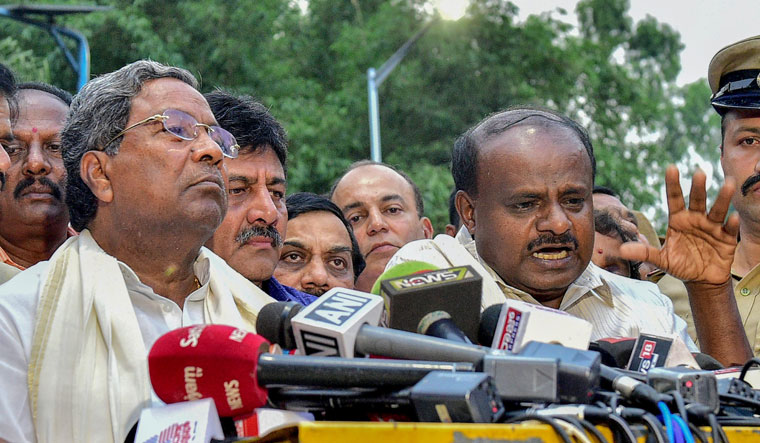 Amidst ongoing political drama in Karnataka, state Congress chief and former chief minister Siddaramaiah said floor test will be conducted at 11am on July 18. This was announced during a Business Advisory Committee meeting on Monday. Speaker K.R. Ramesh Kumar, however, is yet to confirm the same.

The BJP on Monday sought to move a no-confidence motion against the Congress-JDS government, which is battling for survival after 16 lawmakers of the ruling coalition resigned from the assembly. The BJP issued a notice to Speaker K.R. Ramesh Kumar during the Business Advisory Committee meeting attended by party leader B.S. Yeddyurappa seeking to move the no confidence motion.

As many as 16 MLAs—13 from the Congress and three from JD(S)—have resigned from the assembly while two independent MLAs S. Shankar and H. Nagesh have withdrawn their support to the coalition government headed by H D Kumaraswamy.

The Speaker is yet to accept their resignations as the matter is pending before the Supreme Court which will hear the case again on Tuesday. The SC on Monday also agreed to hear a plea of five more rebel Congress MLAs along with the pending petition of 10 legislators seeking a direction to the Karnataka Assembly speaker to accept their resignation.

With enmasse resignations, the government has been pushed to the brink of collapse. Chief Minister H.D. Kumaraswamy on Friday announced he would seek a trust vote to end the 'confusion' caused by resignations of rebel MLAs while asserting he was "ready for everything".

If the resignations of the 16 MLAs are accepted, the coalition's tally will be reduced to 100.