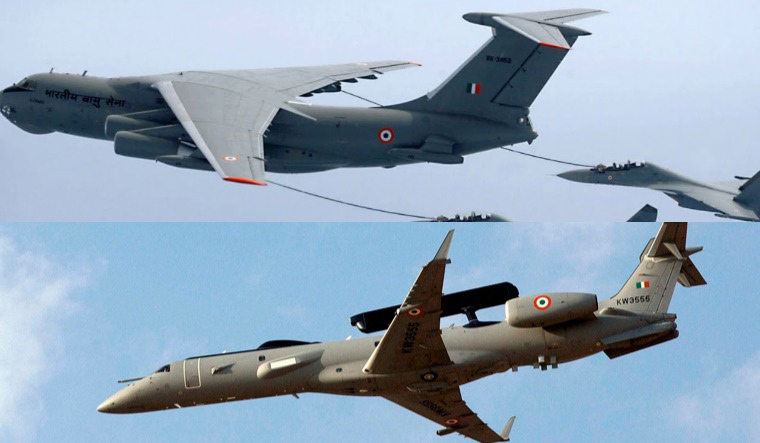 A collage of a IL-78 tanker of the Indian Air Force (top) and a Netra AEW (bottom); In the wake of the Balakot attack, several OSINT handles reported flight positions of aircraft like these

A popular US news website reported on Tuesday that the Indian government had forced Twitter to take action against a number of handles that disseminate 'open source' intelligence (OSINT).

OSINT is information of a political or military nature gathered via commonly available tools such as travel trackers, social media or news media. At least four Twitter handles were suspended over the weekend, but restored following an outcry.

Writing in the Daily Beast, journalist Kevin Poulsen claimed a student of a college in Texas had received a notice from Twitter after the Indian government complained his tweets were a “national security threat”.

The Daily Beast report claimed the tweets of Ryan Barenklau (21) primarily focussed on Crimea and North Korea, “but in May a journal in India wrongly claimed his account was part of a Pakistani disinformation ring”. Barenklau is a senior student at Texas A&M University.

The Daily Beast said it had copies of notices from Twitter several handles had received after complaints from India this month. The Daily Beast claimed “Twitter has since suspended four of the accounts for unrelated violations of the company’s terms-of-service.”

The Daily Beast noted that the tweets referred to by the Indian government in its complaint about Barenklau were “not only not fake, but they don’t concern the subcontinent at all. The five tweets cited in the warning to Barenklau include one commenting on a North Korean missile.”

Another Twitter user who received a notice from the social media company was a British student, who tweets as Elint News.

Elint News had tweeted extensively about developments concerning the military forces of India and Pakistan following the attack on Balakot in late February. But, the Daily Beast report claimed the complaint against him concerned tweets about “Sudan, Syrian and recent developments in the Gulf of Oman”. The student tweeting at Elint News told Daily Beast that he had received death threats for his tweets.

A third OSINT handle that was suspended briefly was The Intel Crab, which belongs to Justin Peden, a 19-year-old student based in Tennessee. The Intel Crab had also extensively covered the post-Balakot military tension between India and Pakistan. The handles referenced in the Daily Beast story claim they had been subject to abuse by people calling them “Pakistani disinformation operators”.

Another OSINT account that was briefly banned was Intellipus. Intellipus was one among several Twitter 'plane spotters' that posted updates about the flight positions of Indian and Pakistan Air Force aircraft including aerial refuelling tankers, airborne early warning aircraft and transport aircraft during the Balakot tension. In fact, Intellipus was providing updates about positions of Indian Air Force aircraft in the immediate aftermath of the Balakot attack on February 26.

It appears Twitter is suspending accounts that are doing open source reporting, in particular those focused on the activities of the Indian Air Force, reporting information from sites like @flightradar24. @IntelCrab, mentioned below, has also now been suspended. https://t.co/pIpwdVF6tv

Interestingly, the founder of Bellingcat, a popular OSINT handle, referred to coverage of the Indian Air Force movement's as a reason for the action by Twitter. Bellingcat has about 150,000 followers on Twitter.

Eliot Higgins, founder of Bellingcat, tweeted, “It appears Twitter is suspending accounts that are doing open source reporting, in particular those focused on the activities of the Indian Air Force, reporting information from sites like @flightradar24. @IntelCrab, mentioned below, has also now been suspended.”

The OSINT Twitter handles covered in the Daily Beast story faced complaints filed on the basis of Section 69A of the Information Technology Act. While their suspension was revoked shortly following protests, Elint News anticipated it could be blocked in India shortly.