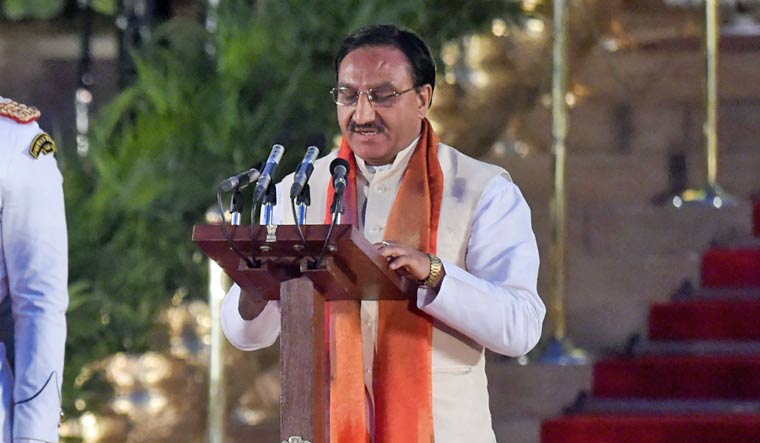 Ramesh Pokhriyal 'Nishank' during the swearing-in ceremony at the forecourt of Rashtrapati Bhawan in New Delhi, on Thursday | PTI

A former teacher at the Rashtriya Swayamsevak Sangh-affiliated Saraswati Shishu Mandir rising to become the Union minister for human resource development cannot but bring joy to the Sangh. But the fact that the teacher, Ramesh Pokhriyal 'Nishank', now a minister, received the draft copy of the Kasturi Rangan Committee, formulated to come up with the New National Education Policy, within minutes of assuming office must have had their cup overflowing.

The act may have been planned, as was the choice of India's new minister for HRD. Ramesh Pokhriyal 'Nishank', a former chief minister of Uttarakhand, comes loaded with experience as a minister. He has been an MLA four times and his academic qualifications are top notch—he has earned his PhD and DLit—and has a long list of published works including poetry, prose, short stories, and stories for children. If that is not enough for the person who will deal with the rising aspirations of a young India, looking for skills that will result in jobs and a lot of opportunities, his works have been translated into various Indian as well as foreign languages.

But Pokhriyal possibly cannot rest with the immediate achievement of having received the draft of the New National Education Policy. He will have to ensure that the curriculum is changed to the satisfaction of the RSS, something that resulted in a controversy every time there was a whiff of it during Prime Minister Narendra Modi's first tenure in office.

In fact, when Smriti Irani was the HRD minister, she announced that the syllabus would be designed in a bottom-up direct consultative way so that every section of the community would have a say. Then headed by former cabinet secretary T.S. Subramanian, the report was not made public by the government. When the ministry later went to Prakash Javadekar, the report of the Subramanian committee was treated as inputs to the Kasturi Rangan Committee appointed in June 2017.

Now it seems that there will be no delay in the announcement of a new policy. Whether it will please all sections of the society remains to be seen. But Pokhriyal, it appears, knows how to get his way.