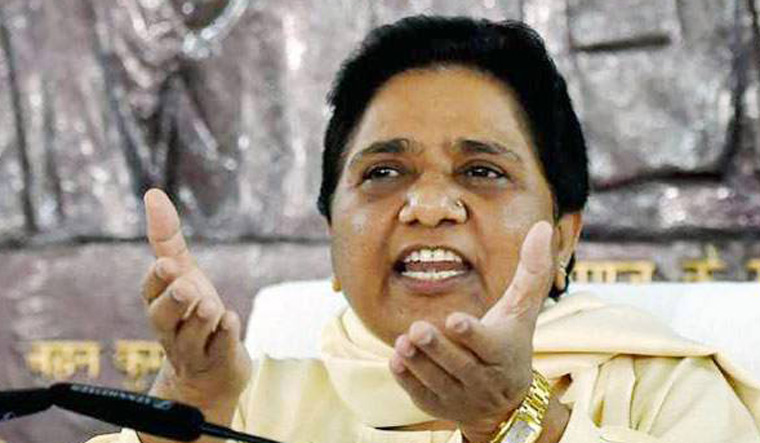 BSP supremo Mayawati on Thursday accused UP Chief Minister Yogi Adityanath of blatantly violating the 72-hr EC ban on canvassing and the poll body with turning a blind eye to the violations.

The former chief minister also claimed that the BJP and Prime Minister Narendra Modi were "nervous and jittery" about their poll prospects.

Hitting out at Adityanath, Mayawati charged that the UP chief minister was deriving political mileage by visiting temples and having food outside the house of a Dalit.

In a tweet, Mayawati said, "By blatantly violating the ban imposed by the Election Commission, UP Chief Minister Yogi (Adityanath) is visiting temples in various cities and doing a drama of having food outside the house of a Dalit. He is deriving electoral mileage by broadcasting them on media, but the Election Commission is lenient (meharbaan) on him. Why?"

The EC on Monday imposed a 72-hour campaigning ban on Adityanath for making communal remarks at a recent election meeting in Meerut. The ban came into force from Tuesday morning.

Mayawati said, "If the Election Commission continues its leniency (meharbaani) and turns a blind eye, then it will be impossible to have this elections free and fair...The BJP leadership is hell bent on forcing itself (manmaani), as it had been doing till now."

"Today, voting is being held for the second phase of elections, and the BJP and Prime Minister Narendra Modi are nervous and jittery like the Congress was feeling in the last Lok Sabha elections. The real reason for this is the mindset, which is against the poor, labourers, farmers, Dalits, backwards and Muslims," she said.