You are 'duplicate Hindus', ours is true Hindutva: KCR attacks BJP 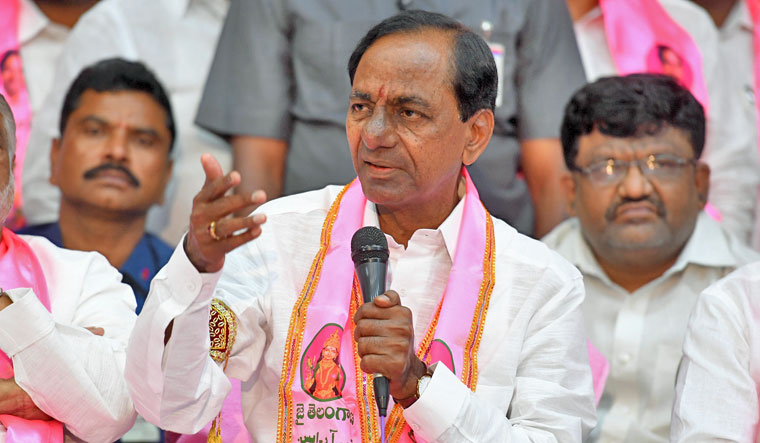 Accusing the Congress and BJP of failing to ensure comprehensive development in the country in spite of the natural resources it is endowed with, TRS president and Telangana Chief Minister K. Chandrasekhar Rao on Tuesday favoured a federal front government in the country.

Campaigning in Nizamabad, Rao alleged that Hindutva followed by the BJP was "political Hindutva."

"Dont we have resources? There are (resources) in the country. But, there is no intelligence to use... There is no water policy in the country because of the alleged misrule of the two parties (Congress and BJP)," he said.

Irrigation projects are not built to provide water to agriculture, he claimed.

The situation should change, he said.

People were fed up with the Congress and BJP which together ruled for over 60 years, he claimed.

China and Singapore have achieved rapid progress in various spheres, he said.

A new economic model and a new agriculture policy need to come in the country and the alleged unrest among poor and farmers should go, he said.

The speeches being made everyday in the country were painful, he said.

"Congress president Rahul Gandhi says the Prime Minister is a 'chor' (thief), while Modi says Gandhi and his mother are on bail (in National Herald case)," Rao said.

"Are these leaders of the country? Are they who should become Prime Minister," he said.

Rao hit out at state BJP president Laxman who criticised him on Monday.

On Rao's remarks that BJP leaders spoke as if they have taken "contract for Hindu religion", Laxman had said it was "devil quoting the scriptures" as the TRS joined hands with the AIMIM which is "anti-Hindu".

"What is your party's stance on Ram temple issue?" Laxman had asked.

Rao said Laxman should first reveal if his party works for people or a party that does religious campaign.

Should political parties deal with 'Janmabhoomi' (birth place) of Lord Ram or other figures in mythologies, he asked.

Religious gurus would deal with issues like birth place of gods and the political parties should address problems like providing water and electricity to farmers, he said.

The matter (Ayodhya issue) was in the Supreme Court and the courts will decide the issue and "we" need not interfere, he said.

BJP talked about Hindu-related issues but "are we not Hindus," he asked.

Alleging that BJP spoke as if Hindus abuse other religions, he said Hindu faith preached love and respect for all.

"Yours is political Hindutva. Ours is true Hindutva... Ours is spiritual Hindutva. You are duplicate Hindus, Laxman ji. Your games would not work for long," Rao said.

Telangana goes to polls in the first phase on April 11.

TRS MP from Nizamabad K. Kavitha, Rao's daughter, mentioned the problems of red jowar and turmeric farmers in the region.

There have been reports that turmeric and red jowar farmers planned to file 1,000 nominations in the Lok Sabha elections as an expression of their protest against failure of governments to provide remunerative price for their produce.

"The BJP government, which boasts about their farmer centric schemes, should first and foremost know the plight of farmers... Thus we want there should be 1,000 nominations to be filed by turmeric farmers," she said, according to a TRS release.

Noting that TRS has stood with the turmeric farmers, also raising the demand for a national turmeric board in parliament, she said the party would continue to speak for the farmers.

She slammed the Congress and BJP for allegedly saying thousands of nominations should be filed in Nizamabad constituency to highlight the problems of red jowar and turmeric farmers at the national level.

Such a thing can be done if a permanent solution can be found, Kavitha told the gathering.

However, the problems of farmers would be highlighted and addressed if 1,000 nominations are filed in Amethi and Varanasi, the constituencies of Rahul Gandhi and Prime Minister Narendra Modi respectively, she added.