Why did Rahul ask Modi to force Sushma to be 'Twitter chowkidar'? 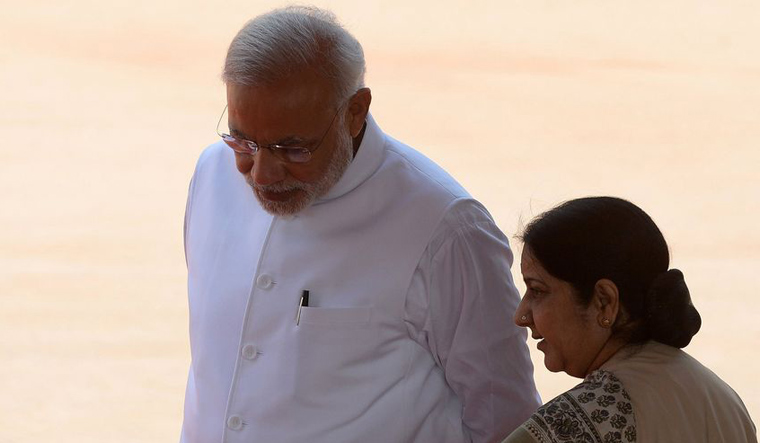 Congress chief Rahul Gandhi has been among several opposition leaders who have lampooned the Main Bhi Chowkidar (I, too, am a watchman) campaign launched by Prime Minister Narendra Modi on Saturday. Modi, on Sunday, added the prefix 'chowkidar' to his Twitter handle, prompting several BJP leaders, ministers and party supporters to do so.

You can keep trying Mr Modi, but the truth cannot be extinguished.

Every Indian is saying it. #ChowkidarChorHai

On Sunday evening, Gandhi added an intriguing postscript to a tweet on the Main Bhi Chowkidar campaign. Gandhi asked Modi to force External Affairs Minister Sushma Swaraj to “add chowkidar” to her handle; Swaraj was among the last senior BJP leaders to do so, adding the prefix on Sunday night.

Gandhi tweeted, “You can keep trying Mr Modi, but the truth cannot be extinguished. Every Indian is saying it. #ChowkidarChorHai… Do force Sushma ji to add Chowkidar to her handle. It’s looking very bad.” Before the announcement of Modi as the prime ministerial candidate of the BJP in 2013, Swaraj was perceived as being a supporter of L.K. Advani and has not been considered a 'camp follower' of the PM.

Gandhi's mischievous tweet appeared to have been prompted by the fact that some senior BJP leaders had not immediately followed the lead of Modi and other BJP ministers. The Wire reported on Sunday Home Minister Rajnath Singh added the chowkidar prefix well after other BJP leaders, while Swaraj was the last senior Union minister to do so. Interestingly, among notable BJP leaders, Subramanian Swamy and Minister of State for External Affairs V.K. Singh are yet to add the 'chowkidar' prefix as of Monday morning!

On Saturday, when the Main Bhi Chowkidar campaign was announced by Modi as an initiative to highlight commitment to combat corruption, Gandhi asked the prime minister whether he was “feeling a little guilty?” Gandhi tweeted a collage of Modi with several businessmen accused of loan defaults and economic offences such as Nirav Modi, Vijay Mallya and Anil Ambani.

In recent months, Gandhi and the Congress have frequently publicised utterances and actions by senior BJP leaders as means to discredit Modi. In October last year, the Congress tweeted a video clip of Road Transport Minister Nitin Gadkari claiming the BJP had made “tall promises” to win the 2014 Lok Sabha elections.

I totally empathise with Parrikar Ji's situation & wish him well. He's under immense pressure from the PM after our meeting in Goa and needs to demonstrate his loyalty by attacking me.

Attached is the letter I've written him. pic.twitter.com/BQ6V6Zid8m

In January, Gandhi claimed Goa Chief Minister Manohar Parrikar, who died on Sunday, was “under immense pressure from the PM after our meeting in Goa and needs to demonstrate his loyalty by attacking me.” Gandhi had referred to claims by Parrikar that he had no involvement, during his tenure as defence minister, in announcing the deal to buy 36 Rafale fighters, which the Congress has claimed was marred by irregularities.

In February, Gandhi tweeted Gadkari was the only leader in the BJP with “some guts”, referring to statements made by the minister that many interpreted as being critical of Modi.