Around 100 cars gutted at AeroIndia 2019 show at Bengaluru 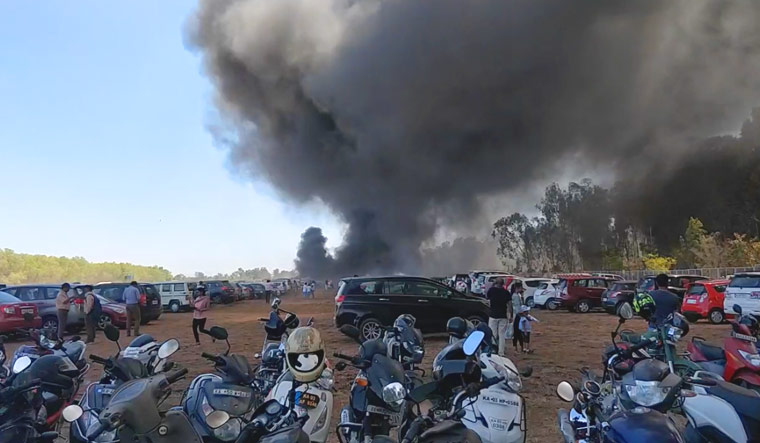 Police said a car caught fire at the site

Around 100 cars were gutted near Gate 5 of AeroIndia 2019 in Bengaluru on Saturday resulting in massive flames and smoke in the area. The fire started near the AFS Yelahanka Gurudwara near Bharati Nagar Gate. According to a policeman, one car caught fire which then spread to around 50-60 cars around it resulting in tower of smoke and a huge blaze.

Ambulances stationed at the site attended to people suffering from smoke inhalation. They were soon rushed to nearby hospitals. No other casualities were reported.

More than ten fire engines were at the site to douse the blaze, which is now under control. Officials said sparks from the burning cars resulted in smaller fires around the area, which too are under control now. Air Force and police are in full force at the site. Rapid Action Force, too, are at the spot.

A family which lost a car in the fire said, "We drove three hours to get here and had just parked and locked up when the fire started in earnest. We had to run with the children."

People near the gate could hear loud explosions from the blaze caused by the bursting tyres and exploding fuel tanks. Initial estimates by the police and other officials put the damage at around 80-100 cars destroyed. This figure includes both partial and complete destruction.

Initially, the blaze and thick smoke was moving towards the area where hundreds of vehicles were parked. As the owners of the vehicles were at the show, more damage was expected as the cars could not be moved. Later, police were seen trying to move the vehicles with the help of tow trucks.