Bouquets and brickbats for India's fight against TB, HIV and Malaria 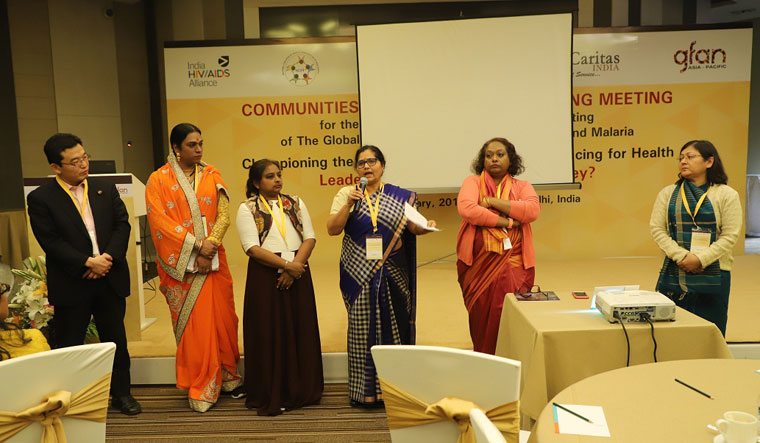 India will become the first country from the global south to host a Preparatory Meeting of the Global Fund to Fight AIDS, TB and Malaria, slated to be held in the national capital on February 7 and 8. Officials from 85 countries and an estimated 250 other experts, activists and delegates are expected to participate in the event that will see nations commit themselves to mobilise funds to combat the three diseases expeditiously and effectively.

The Global Fund is a partnership among governments, civil society and private sector as well as people affected by AIDS, TB and Malaria. In its “sixth replenishment” summit, it will raise funds for 2020-2022 at a “pledging conference” in Lyon, France later this October.

The India Working Group and the Global Fund Advocates Network for Asia-Pacific met in New Delhi on January 16 and 17 to support joint strategising and create synergies among India civil society and regional and global communities.

The government of India's Swachch Bharat Abhiyan and the Ayushman Bharat (Modicare) have found resonance with the views of Dianne Stewart, Head, Donor Relations, Global Fund to Fight AIDS, TB & Malaria. Dr Sonal Mehta, chief executive of the India HIV/AIDS Alliance, spoke of the challenges caused by shortfall in allocations.

Excerpts from the interviews:

How much will it cost to combat these three diseases in areas where they are prevalent?

Right now the global fund has estimated that in order to meet the global needs we are looking at nearly $66 billion for the current cycle, 2017-19, which means there is a large increase for our next cycle 2020-2022, to the amount of $83 billion. So we see the needs increasing dramatically.

How much of this goes towards treatment and how much would be the mobilisation and administration costs?

The total need is $83 billion. We at the Global Fund are asking for $14 billion. Of that, we use less than 5 per cent as our administrative costs. The rest of it goes to Global Fund programmes in different countries.

What is Global Fund's role on the ground?

We do prevention as well as treatment. Normally, GF funds 50 per cent of treatment, and also prevention and strengthening of health systems. Some of these are broad areas, like strengthening of data systems, supply chain systems etc. All these are necessary for treatment to be succesful, and we have to invest in underlying systems to make sure that these systems function.

What is more challenging, treatment or getting people to the point of treatment?

Right now our challenge is definitely in the prevention area. One of the issues we are finding is, there is a large burden of TB in India, the biggest challenge is missing patients who have TB. We don't know who they are, we have not identified them. Once we have clients who are interacting with the health system and are able to access treatment, they complete their treatment and they get better, the problem is we don't know where those people are, they have not been diagnosed as having TB.

So right now our biggest challenge—in terms of HIV prevention, TB identification and diagnosis, and to some extent reaching the communities most affected by malaria—is in the prevention area, making sure that people have the tools to protect themselves and are rapidly diagnosed when they are infected.

Which of the three diseases is India most affected by?

The highest priority in India right now is TB. India has a quarter of the world's TB burden. So if India does not succeed in TB, the world will not succeed in TB. The next challenge would be prevention of HIV, particularly, in the most marginalised groups and people who are stigmatised and therefore they do not access health systems. Malaria is a more regional challenge and so there are states where malaria is still a problem, particularly among children.

So are you able to see the impact of Swachch Bharat?

Yes, because one of the biggest challenges of malaria is the standing water, which is where mosquitoes breed. Clean India can have an impact of reducing standing water, cleaning up neighbourhoods, and clean urban settlements will reduce malaria transmission dramatically.

How do you find India's efforts to tackle these diseases?

We work very closely with the government of India in helping implement policy changes or in production of new diagnostic tools or introduction of new drugs. The government of India has an incredibly strong national policy on HIV, TB and Malaria, and so we are happy to support those programmes, particularly, we are happy to promote the community outreach programmes because that is how we can address the TB problem in the country, by strengthening the community outreach.

Is India spending enough on all these efforts?

India like almost every other country in the world can certainly increase national investment in health. We hope for a 46 per cent increase globally in domestic resource commitment to fight the three diseases and we hope that India would continue to invest in the way promised. In order to meet the goals, India should increase the investment, particularly to TB.

One of the ways in which countries are considering to ensure sustained financing for health, has been through health insurance schemes. In several countries in which the Global Fund works, we are also supporting national health insurance scheme. We think it (health insurance) can be part of the solution, but in each country in which the insurance system is designed and implemented, has huge impact on how succesful it is. So, we are encouraged by the approach the Indian government is taking, and if there is anything we can do to help the ambitions of India to increase health financing at the national level.

How much does India need to spend in combating these three diseases?

The National Strategic Plans of each of these diseases has a particular number, $5.3 dollars till 2024. Our prime minister has promised that India will reach the global targets a year before the deadline.

Is the allocation enough?

No. The National Strategic Plan reflects the need but it does not reflect the actual budget, which is much less than what we ask, and the actual expenditure is even more less. There is a reason for that. For example, if we asked for eight blood banks, we would be given three, and then it becomes a political issue of which districts to locate them in. Because we do not have enough aid, we can't even spend for three. So it is a catch-22 situation.

Does Ayushman Bharat cover this?

Ayushman Bharat does not include HIV. But it does cover TB, Malaria and other “opportunistic infections” that anyone can have because of HIV. So it is all the more the reason why HIV must be fully funded though in the HIV programme government gives free treatment.

Under Ayushman Bharat, the fallout infections of HIV is covered, but it does not prevent. So HIV prevention programmes are important and have to be fully funded. Otherwise we will keep doing fire fighting, we will keep treating. We need to focus on prevention.

Do we spend more on treatment or on prevention?

For every disease, a quarter of the allocation has to be spent on prevention.

India has committed 30 per cent spending on health through communities as well as societies (which mainly focuses on prevention). It means spending through organisations of people affected by the diseases or NGOs who are working in the field with the affected people, since they are the ones who can reach those in need of these services. But, unfortunately, that is not happening.

And once the funding is over, these people have to stay in the community in areas where it is difficult to reach and continue to provide the services irrespective of problems. That must also happen.

But, right now, the lowest spending of money goes to communities. Training sessions are absent in almost all the programmes, and so is capacity building. A lot of money goes into commodity buying, which means buying treatment, which obviously is very important, but the government should pay for that. The Global Fund money should go for strengthening community systems (for better prevention).