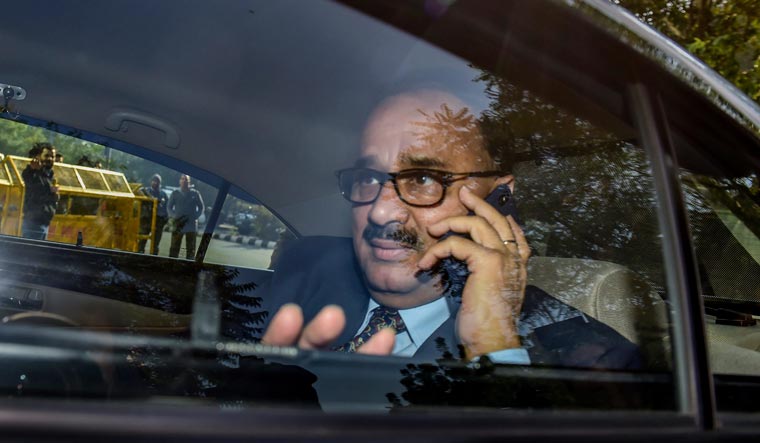 CBI chief Alok Verma arrives at CBI headquarters, a day after he was reinstated by the Supreme Court, in New Delhi | PTI

The removal of Alok Verma from the post of CBI director has created a huge controversy.

The Supreme Court had earlier restored Verma to the post on the ground that only the three-member High Powered Committee, consisting of the prime minister, the leader of opposition and the Chief Justice of India ( or their nominees), could have passed the order to send him on leave.

Subsequently, that defect was cured as the said committee met and ordered the removal of Verma from the post of director, CBI, and his transfer to some other post of equivalent rank.

Since the prime minister was in favour of transferring Verma and Mallikarjun Kharge (representing the opposition) was not, the decisive decision was that of the third member, Justice Arjan Kumar Sikri, the nominee of the CJI, who agreed with the prime minister.

Many relatives and friends asked me whether Justice Sikri's decision was correct.

I replied that I had known Justice Sikri since 2005 when I was the Chief Justice of Delhi High Court, and he was a puisne judge there. He has always had an impeccable reputation and I do not believe he could be influenced or pressurised by anyone. So, it is absolutely false and unfair to say that he acted as Modi's puppet or to get some favour. Also, there must have been some strong prima facie material against Verma on the basis of which Justice Sikri took his decision, though what precisely that material was, I do not know (except from what I read in some newspapers about trying to shield some big defaulters and influence the proceedings against them).

I said this on a Facebook post, on which many people commented why Verma was not given a hearing by the committee. I telephoned Justice Sikri the next morning and asked his response to this. He replied:

1. The Central Vigilance Commission (CVC) had given Verma a hearing and then recorded some strong prima facie findings against Verma regarding his integrity.

2. The committee, including Justice Sikri, had read the CVC report as well as the material on which its prima facie findings were based.

3. Justice Sikri was of the opinion that in view of these prima facie findings, Verma should not continue as director, CBI, as it was a sensitive post and the person holding it should be absolutely above suspicion. Hence he should be transferred to some other post of equivalent rank and pay, which was not so sensitive.

4. As regards the question of not giving a hearing to Verma, it is well settled in service law that a hearing is necessary before a government servant is dismissed, but there is no legal requirement to give him a hearing before suspending or transferring him. Verma was neither being dismissed nor suspended, but only transferred. Moreover, the CVC had heard him.

I posted Justice Sikri's reply to me also on Facebook.

Today, I came to know that Justice Patnaik, who had been appointed by the Supreme Court to supervise the enquiry by the CVC against Verma, had given some statement saying there was no evidence of corruption against Verma. So, I telephoned Justice Patnaik and had a long discussion with him on the issue. He has asked me not to share with others what we discussed and what he told me. But he did permit me to mention that no journalist sought an appointment with him to discuss the matter, and only one lady journalist from The Indian Express had telephoned him, and they spoke for less than a minute. On the basis of that perfunctory telephonic talk with a single journalist, several long stories were published in newspapers and on social media—all (except the one of that lady journalist) by journalists and persons who had never contacted, or perhaps never even tried to contact Justice Patnaik.

For instance, one lady journalist wrote in Hindustan Times that the decision by the High Powered Committee was too hurried. Perhaps, she did not even bother to read the Supreme Court judgment which said the committee must decide within a week. She also wrote that the committee should have heard Verma. Had she bothered to contact Justice Sikri (on his email id aksikrij@gmail.com and phone no. 23016022/23016044 which I posted on Twitter) she would have got the answer.

Stories and comments by journalists without proper investigation is fake news. The expression by Donald Trump—media is true enemy of the people—may not be true for the American media, but it is certainly true for most of the Indian media which largely believes in creating sensations and providing masala to the public. It is no surprise then that the people do not hold most of the media and journalists in high regard.