'Companies would not be held liable': Officials clarify after namaz order backlash 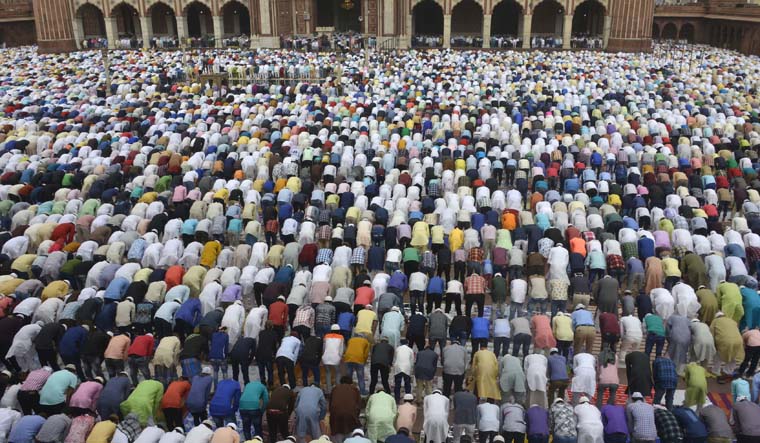 Muslims offer namaz and prayers on the occasion of Eid-ul-Fitr, in New Delhi on Saturday | Arvind Jain

After backlash the district administration of Noida has said that the companies which were issued notice regarding employees offering namaz at public places would not be held liable.

A police station in Uttar Pradesh's Noida had sent notices to 23 private firms asking them to stop their Muslim employees from offering Friday prayers at a local park, with the administration on Tuesday saying that "unauthorised" religious gatherings will not be allowed at public places.

Officials had cited a Supreme Court order of 2009 and said that there is a clear ban on unauthorised use of public places for religious activities by all religions.

At a press conference on Tuesday, District Magistrate Brajesh Narain Singh said “Companies and business houses are not liable for employees' religious beliefs and prayers. The district administration will talk to the companies and clear their doubts."

Singh also clarified that no companies would be held responsible for their employees' personal activities, as was mentioned in the police notes.

The notices, which were issued by Sector 58 Station House Officer (SHO) Pankaj Rai earlier this month, stated that a park of the Noida Authority in the area was "not permitted to be used for religious gatherings, including the Friday namaz".

"It is often seen that Muslim employees of your companies gather in large number in the park despite being advised against doing so and despite the city magistrate denying their request for permission to use it for offering namaz," the notices, addressed to the managers of the firms, said.

"Therefore it is expected of you to inform your Muslim employees at your level and if they still assemble at the park, then it would be considered that you have not informed them and held as responsibility of the individual company," the notes stated.

SSP Sharma said the notices were only for the purpose of information so that employees of these firms could be made aware that there was "no permission" for holding religious gatherings in the particular park. Singh said such gatherings would be allowed only if permitted by the administration.

SHO Rai said the notices were issued after a complaint was received from residents of Bishanpura village, under the Sector 58 police station limits, which is close to the park.

"The park has witnessed a rise in number of people gathering for the Friday prayers without any approval for it in the public park," the complaint, dated December 16, stated.

"This is a well thought out conspiracy to use the authority's public park for private and religious use," it said.

The complainants also claimed that they had come to know that a "mazaar" "could be" constructed there.

The district officials referred to the apex court's ruling in the 2009 case of the Union Of India vs State Of Gujarat and Others, in which it had ruled that no unauthorised construction shall be carried out or permitted in the name of temple, church, mosque or gurdwara on public streets, public parks or other public places.