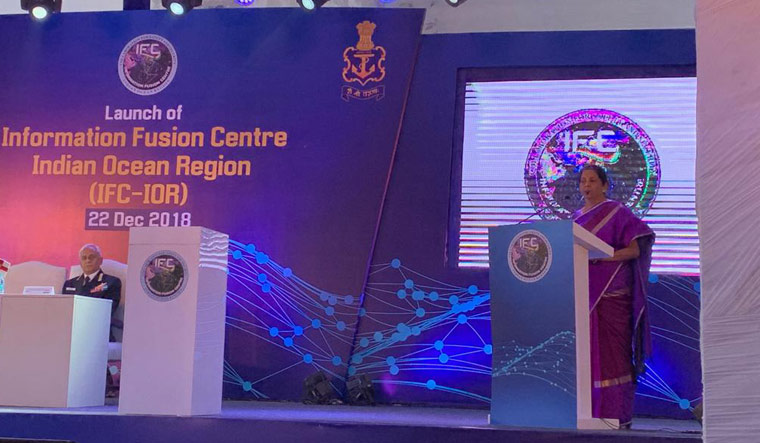 ith an aim to strengthen maritime security in the Indian Ocean Region (IOR), Indian Navy has launched its Information Fusion Centre (IFC) that will share information on vessels of interest with other friendly nations. IFC will function as a platform where multiple friendly nations can freely exchange non-sensitive information from maritime domain.

IFC is based at the Indian Navy's Information Management and Analysis Centre (IMAC) at Gurugram in the National Capital Region. IMAC is the single point centre on Indian Navy, linking all the coastal radar chains to generate a seamless real-time picture of the nearly 7,500km coastline.

The IFC-IOR is capable of tracking and monitoring 75,000-1.5 lakh shipping traffic in the region in real-time round the clock.

Navy said IFC-IOR will work closely with friendly nations with whom India has already signed White Shipping Information Exchange agreements. So far, Indian Navy has signed the agreement with 21 countries, out of which with 12 countries such agreements of sharing information have already been operationalised. Indian Navy is so far mandated to have white shipping agreement with as many as 36 countries.

The inauguration of the maritime surveillance centre was done by Defence Minister Nirmala Sitharaman. The event was attended by diplomats of various countries, including the US and the UK.

" IFC-IOR is aimed at keeping the global commons open and accessible for all. It is for equals, it is for partners,” Sitharaman said, and added that the need for IFC-IOR stems from importance of the IOR for world trade and security.

"More significantly, the IFC-IOR will help foster bonds of trust, camaraderie and partnership— ingredients that are vital for relationships between nations to transcend from being merely transactional to ones that are transformational”, the minister further said.

So far, nearly a dozen countries, including the US, France, Italy and Japan, Singapore, Oman have expressed interest in posting their officers.

The Navy said the expertise of the resident ILOs would be utilised towards sharing of real-time information with partners as well as for generating timely and adequate response to developing situations. The resident ILOs would then collate information from their allocated areas of responsibility and contribute towards development of a common operational picture that would be shared with partner countries.

“The ILOs would also interact with their national maritime security agencies and solicit response to developing maritime scenarios in the IOR,” a naval officer said.

IFC-IOR will work closely with countries in the region on white shipping and will be operated by the Indian Navy.

Under white shipping agreement, only commercial shipping information about movement of cargo ships are exchanged.

"So far, this centre can only deal with merchant vessels, and information movement of warships in the IOR are kept under classified nature and will not be shared by this platform," said an officer.

Speaking on the occasion, Navy Chief Admiral Sunil Lanba said the IFC-IOR is initially being launched as a virtual construct wherein information exchange will be done electronically through the internet. "During this phase, the IFC-IOR shall be administered from the IMAC. The centre would host International Liaison Officers from participating countries on a permanent basis, accruing immense value from their combined expertise, " he added.

"Maritime piracy and maritime terrorism are the two major ways in which non-state actors threaten to jeopardise the security of the maritime domain, with a direct influence on land affairs," the Navy chief said.

Additionally, the IFC-IOR would work towards capability building in the region, coordination of incident response and disaster relief, and share submarine safety information.

According to the Navy statement, the Indian Ocean Region is vital to world trade and economic prosperity of many nations as more than 75 per cent of the world’s maritime trade and 50 per cent of global oil consumption passes through the IOR. "However, maritime terrorism, piracy, human and contraband trafficking, illegal and unregulated fishing, arms running and poaching pose myriad challenges to maritime safety and security in the region. Response to these challenges requires enhanced situational awareness of the maritime activities in the region so as to enable security agencies function effectively," the statement said.