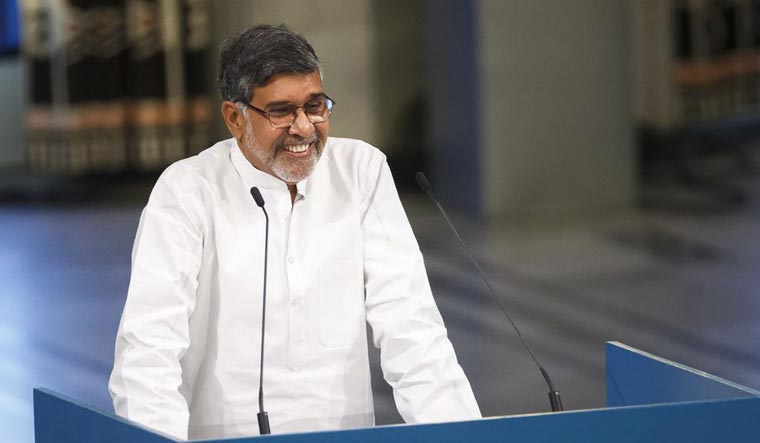 He also praised the Hindutva organisation for its "immense contribution" to the society.

Satyarthi said he would attend events organised even by the outfits affiliated to the Sangh, the ideological mentor of the Bhartiya Janata Party, if invited because his ultimate aim is to make India safer for children, and he believes that Sangh is capable of doing so.

Satyarthi had attended the Vijayadashmi rally of the RSS, which was addressed by its chief Mohan Bhagwat, as the chief guest in Nagpur on October 18.

On the occasion, he had said RSS shakhas (branches), situated in almost all villages in the country, can serve as a firewall to protect children, especially girls.

"The contribution made by this vast, disciplined and cadre-based organisation to the society is quite huge which cannot be denied or ignored.

"This countrywide, cadre-based and one of the most disciplined organisations has, undoubtedly, made immense contribution to the society. So there was no question of any re-think over the invitation received from them (to attend the rally as the chief guest)," Satyarthi told PTI here Thursday.

He was in the city to attend the The Economist India Summit 2018.

Satyarthi said he felt "satisfied" after attending the Sangh event.

"Healthy discussion and debate is the backbone of a functional democracy. I feel satisfied after attending the event and if invited again, even by affiliated outfits of Sangh, I would attend such events. My ultimate aim is to make India safer for children and this outfit has capability to do so," he said.

The 64-year-old child rights activist had won the Nobel peace prize in 2014 for his Gandhian way of struggle against the exploitation of children.

Citing data of National Crime Records Bureau (NCRB), he said, "Eight children go missing every hour in our country, while four children are sexually harassed and two raped every hour.

"If this vast organisation (RSS) takes up and carry forward the issue of upliftment of our children with utmost priority, then it will be far better not only for the children and country but also for the wider acceptability of the organisation," he said.

Satyarthi said swayamsewaks of Sangh have displayed their desire to work against the child labour. "I am hoping for a positive outcome in this regard," he said.

However, he also added that though RSS is well-equipped to do service for the cause of children, it is not the only organisation to do so.

Satyarthi said "I do politics to protect the interests of the future generations".

"Actually, I don't believe in ideological, religious or caste untouchability. I strongly believe that if you have to have a vibrant democracy, build a responsible society and citizenship, build a strong nation and economy, then you cannot remain divided in your own silos, in your own shells, in your own chambers. You cannot create walls," he said.

Referring to India's history, Satyarthi underlined the need for a dialogue and debate on various issues.

"Now, unfortunately, we are creating more and more walls in our society. So, for accepting this invitation to RSS, I felt quite happy and satisfied. Because first of all they were open to invite me. I went there with my agenda. They had their agenda," he added.

He said the entire world had one agenda "of protecting one generation" that would later take care of the future ones.

Satyarthi said he appealed to the RSS to work on five things: "to make India a self-reliant, passionate, safe and inclusive country where diversity is respected. (I asked them to) make the country proud of its culture and spirituality".

He suggested that places of worships of every religion as well as institutions belonging to different faiths and even naxalites and communists can come forward to protect children.

"And RSS is very appropriate for this work," he added.