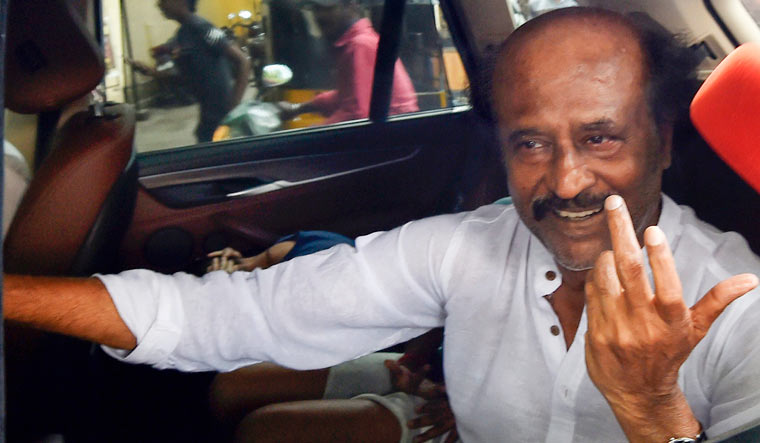 Actor Rajinikanth leaves after a meeting with members of Rajini Makkal Mandram, at Raghavendra Kalyana Mandapam in Chennai on Monday | PTI

On March 5, after unveiling a statue of former Chief Minister M.G. Ramachandran at a university campus in Chennai, actor Rajinikanth who is yet to launch his political party, had declared his style of politics. He had said that he would “rule like MGR” if he was voted to power. Months later, after 90 per cent of the ground work to launch his party is over, the macho hero still seems to be in a dilemma in choosing his style of politics and launching his party. In a two-page detailed statement released on Tuesday, Rajinikanth again sought to explain to his fans, followers and his Rajini Makkal Mandram (RMM) members his style of politics.

“In May this year, when I had the fans meeting, I had made it clear that I would not entertain anyone with the intention to make money or look for lucrative positions. I had said that those who had such intentions should get away. It was not just words that I uttered. I want to bring a new political rhetoric in Tamil Nadu and usher in a change in the political scene in the state,” Rajinikanth said in a statement on Tuesday.

The actor's fresh statement came days after he said that the Mandram is intact and that 90 per cent of the ground work is over. “I will announce the date of the party launch at an appropriate time,” Rajinikanth had said as he returned from Lucknow where he was shooting his upcoming film Petta, produced by the Sun pictures. His comments exhilarated his fans and followers who have been waiting for his political entry and a blockbuster film after his latest flick Kaala which flopped at the box office.

However, on Tuesday he chose to send out a self explanatory message justifying the actions taken against some fans who were removed from the RMM recently. He clarified that removing certain people from the RMM was necessary to drive home the need to maintain discipline. “There has been a misinformation campaign that such removals were done without my knowledge. Every action was taken in the RMM with my knowledge and approval,” said Rajinikanth.

While the statement has sent a strong message to his fans and followers that money and power will hardly play any role in his way of politics, it has also revealed that the superhero is still weighing the pros and cons of politics and whether he can make it big in politics like he did in cinema. “If someone believes that we can achieve whatever we have dreamt of with just the fan club, he is not mentally stable. Without the support of the people, we cannot achieve what we want to,” he said. Rajinikanth's statement came ten months after he said he would take the political plunge, in front of a huge fan crowd who hailed him as the next chief minister of Tamil Nadu.

Though the RMM is said to be growing strong, it has not yet been able to get into the ordinary people apart from the people in the fan club. Rajinikanth’s fan base is, of course, huge with several millions of people across the globe. However, it is still a question as to how much of this will turn into votes when Rajinikanth gets into electoral politics.

The actor said even a person associated with the fan club for more than 30-40 years doesn’t mean that he can get positions in the Mandram. “We need to enroll people and identify those with enthusiasm to work by offering them posts,” he said. While making it clear that he has shunned the fan club and renamed it as Rajini Makkal Mandram only to give positions to “ordinary people who want to work along with us for a social cause”, he said only those who were acting against the RMM’s ideologies were removed from it.

Rajinikanth’s hard hitting statement came at a time when he is still undecided on the appropriate time to launch his party. It may be recalled that a few big names like Raju Mahalingam and V.M. Sudhakar, who were active in the RMM till recently, do not figure in any of the Mandram meetings or statements. In fact, after Rajinikanth set out to the Himalayas to shoot Petta, the activities in the RMM have been sober.

For political observers in Tamil Nadu, Rajinikanth's loosely constructed statement leaves a lot to be desired. The actor, who has been talking politics before and after the release of each of his films for the last one decade, has once again revealed his political illiteracy and how he still has the fear of losing within him.