Paripoornananda, who has a growing number of followers, was born in Kerala 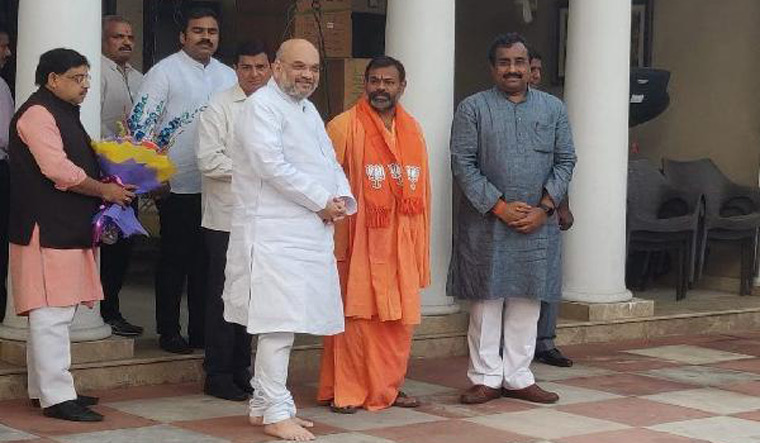 The Telugu states of Telangana and Andhra Pradesh were home to a number of influential spiritual and religious figures in the past. And topping the list is late Satya Sai Baba of Puttaparthi. Even today, a number of ashrams and babas are galore in various corners of these two states giving blessings to politicians, industrialists and commoners. However, none of these leaders with cult following could make a cut in active politics. Ahead of the 2018 state elections in Telangana, for the first time in the state, a powerful saffron guru has been brought to the fore.

BJP has found a star in Swami Paripoornananda who was inducted into the party by President Amit Shah in Delhi. Paripoornananda is the most vocal among his ilk when it comes to Hindu religion or on the topics of nationalism. This has also forced him to wade into controversies. Recently, he was externed by the Telangana police for his provocative statements on a sensitive issue.

Paripoornananda is known to be vocal, sharp and fearless, which has won him a number of followers.

Around 44 years of age, Paripoornananda can be loosely interpreted as a mix of Yogi Adityanath and Baba Ramdev. If he has the political acumen of the former, then he also possesses the business sense of the latter. This explains why the BJP bosses had been toying with the idea of launching the Swami for some time now.

Born in Kerala, Paripoornananda spent his childhood in Nellore and other towns in Andhra Pradesh with his parents. Respecting his mother’s vow, he decided to become a sanyasi and grew up in the Ashram of Dayanad Saraswathi in Rishikesh. Later, he established an ashram at Kakinada in Andhra Pradesh and founded Sree Peetham, a spiritual organisation. Over the years, Swami’s speeches are a hit with hardline right wingers, whether it is at a Ganesh pandal or a prime time discussion on TV. He has earned goodwill by extensively touring dalit areas and working for their upliftment. He also started the Hindu Rashtriya Sena with an aim to safeguard and strengthen Hindu religion through numerous programmes. He has also been in the forefront on the issue of cow protection in the two Telugu states.

Paripoornananda, who fluently speaks Telugu, Hindi, Malayalam and Tamil, is one of the few Hindu gurus who can switch to English effortlessly and talk at length about technology.

Similar to Baba Ramdev, his followers have branched out into preparing a number of beauty and edible products. These items, mostly, made from cow extracts, are also a hit in the local market. Apart from that, a TV news channel is run by his followers. This is where his significance grows in the party and makes him stand out within the party.

It is still unclear on how the party plans to use him or where they will ask him to contest from, but it is clear that the BJP has got its mascot for south of Vindhyas.