Opinion: Regarding Ganga as holy a sign of feudal mindset 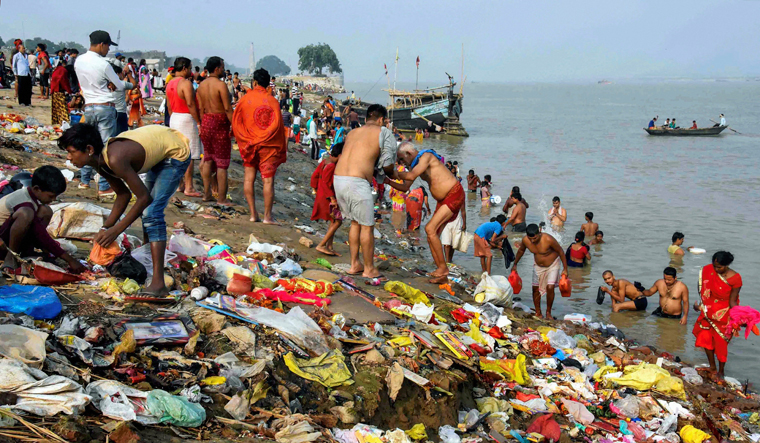 Devotees take a holy dip in River Ganga on the first day of the Navratri festival in Patna, Wednesday, Oct 10 | PTI

I, too, am attached to the Ganga in the sense that I spent most of my life in Allahabad, and had countless dips in the Sangam. I have bathed there in many Kumbha Melas and Magh Melas. I have read the account of Lord Rama's visit to the ashram of Rishi Bharadwaj at Prayag in Tulsidas' Ramcharitmanas, and of Emperor Harshavardhan's Kannauj and Prayag assemblies, which were witnessed by the Chinese pilgrim Huien Tsang.

I have travelled to Haridwar and Rishikesh many times, and gone upto Gangotri, where it is said Ganga descended from the sky due to the tapasya of Rishi Bhagirath (because of which it is also called Bhagirathi) and landed on the jata of Lord Shiva.

I, too, would like the Ganga water to be pure, but then I am not selective. All Indian rivers should be clean, not just the Ganga.

According to the National Green Tribunal, over Rs 7,000 crores has already been spent on cleaning the Ganga, but it remains as polluted as before. When I visited Varanasi I was informed that 30 sewages discharge their filth into it. And in my home town Allahabad, where Hindus come from far off places to bathe in the Sangam, the river water is heavily polluted. Industrial effluents are discharged into the river everywhere with impunity, for example, by tanneries in the Kanpur-Unnao industrial belt, despite the Environment Protection Act, 1986.

In 1986, the then prime minister Rajiv Gandhi set up a Ganga Action Plan, headed by a senior IAS officer, and huge funds were placed at its disposal. In 2009, the National River Ganga Basin Authority was created, and in July 2014, shortly after the BJP government came to power, the Namami Gange (I worship the Ganga) project was initiated and a mammoth Rs 20,000 crores was allocated to it to be spent over five years.

Though not said so expressly, the underlying thought behind all this was that Ganga is not just the largest river in India, but also a 'holy' river, and therefore must be saved.

But many other Indian rivers are also regarded holy by people. Many people regard the Narmada, which originates at Amarkantak, as holy. Some regard the Sabarmati, where Gandhiji had his ashram, as holy. Others regard the Godavari, the Krishna, the Mahanadi, the Kaveri, the Brahmaputra or the Shipra as holy. Several other smaller rivers like Sarayu, Ghaghra, Betwa and Chambal may also be regarded as holy by some. So why then should huge funds be not allotted to them also for keeping them clean?

I suggest that regarding rivers, animals etc as holy is silly. I have never heard the Americans calling the Mississippi, or the English calling the Thames, or the Chinese calling the Huang Ho or Yang Tse Kiang, holy. In fact, it displays a feudal, backward mindset which must be eschewed, and instead scientific thinking adopted, if the country is to progress.