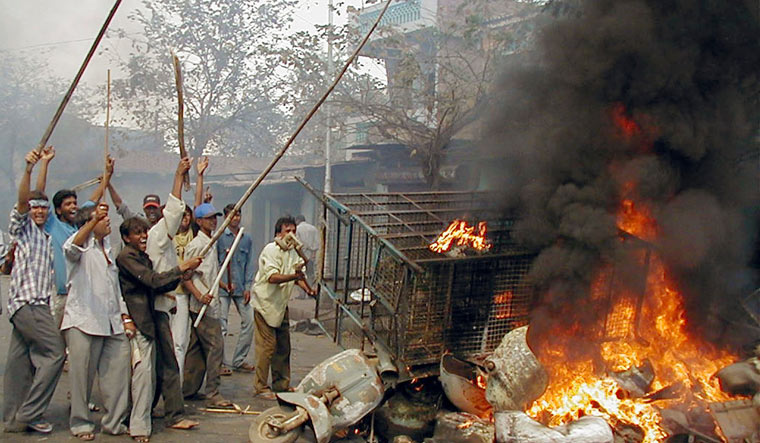 [File] Rioters wave sticks as they stand next to a bonfire on the streets of Ahemdabad, Gujarat in this February 28, 2002 photo| Reuters

The administration of then state chief minister Narendra Modi failed to provide transportation in time to move the Army out of the Ahmedabad airfield to affected areas during the 2002 Gujarat riots, claims Zameer Uddin Shah, who had led the Indian Army contingent for the operation.

Shah and his contingent had to wait for about 24 hours before the Gujarat government provided them transportation to move out of the airfield to the affected regions to quell the Gujarat riots.

The team, airlifted from Jodhpur, had reached the Ahmedabad airfield by the night of February 28, 2002, the same day the Gujarat government requested Army deployment through the Home Ministry and the Ministry of Defence. The rest of the troops reached by 7am on March 1. That's when he realised there is a delay.

"The Deputy GOC (General Officer Commanding-in-Chief) of the lodger formation received me. I asked, ‘Where are the vehicles and other logistic support we had been promised.’ He shrugged his shoulders and replied that the state government was making the necessary arrangements," pens Shah in his memoir The Sarkari Mussalman, The Life and Travails of a Soldier Educationist, a copy of which is with THE WEEK.

Soon, Shah headed to Modi's residence at 2 am on March 1, 2002 and was pleased to see then defence minister George Fernandes already there. Shah apprised the duo of the situation. However, things did not go as planned.

"By 7 am on March 1, 2002, we had about 3,000 troops landed, but no transport, so they remained at the airfield. These were crucial hours lost. Our road columns reached us on March 2 and so did the requisitioned civil trucks, magistrates, police guides and maps," Shah writes, adding," Extensive damage to property and life, primarily of the minority community, had taken place on 28 February 2002."

He recalls that Ahmedabad was already burning when they were approaching the airfield. "I observed that the city was aflame. There were fires burning all across the city," he says in the book. Shah goes on to say that restoring the rule of law in riot-hit Gujarat in 2002 was the "most taxing period" in his career. "The Army put an end to the mayhem within 48 hours by resolute, firm and fair action,” Shah writes.

The Gujarat riots of 2002, which left more than a thousand dead and scarred many for the rest of their lives, is a blot on the 21st century India. Various revelations related to the riots ensure that the worst communal violence India saw in its recent history comes back to haunt Prime Minister Modi. Shah's book is the latest in the league and is likely to open a can of worms in the current politically charged atmosphere.

In the prologue to his book, Shah blames lack of will and action from the police for the bloodbath during the Gujarat riots. "The official figures of deaths and damage do not reflect a true picture of the actual extent of the carnage, especially in the rural areas. Armed mobs were indulging in arson and murder. The police were conspicuously absent," pens Shah.

It was absolute mayhem that Shah claims he contemplated imposing martial law. "I was dissuaded from taking this extreme step as it might have been construed as overstepping my mandate," he explains.

It is to be noted that Shah, who retired as the deputy chief of Army Staff, had maintained silence on details of the Gujarat riots all this while. However, the book, which will be released on October 13, has changed that stance. "Now I wish to present something worthwhile for the reader to ponder over," Shah explains.

As the official who led the Indian Army during the worst carnage in recent Indian history, Shah pins the blame on the civil administration that lacked resolve to stem the violence and led to escalation of the riots in Gujarat.

Apart from the Gujarat violence, the memoir also throws light on the life of a Muslim Army man in India. At one point, aspersions were cast on him, a Muslim, being assigned to suppress communal riots.

Shah also tries to bring attention to the lack of action against communal instincts and tension currently prevalent in the country through his book. By recalling his memories from the partition days, Shah, in an open letter to Prime Minister Narendra Modi, reminds that it takes "three generations to forget" the horrors of communal violence.