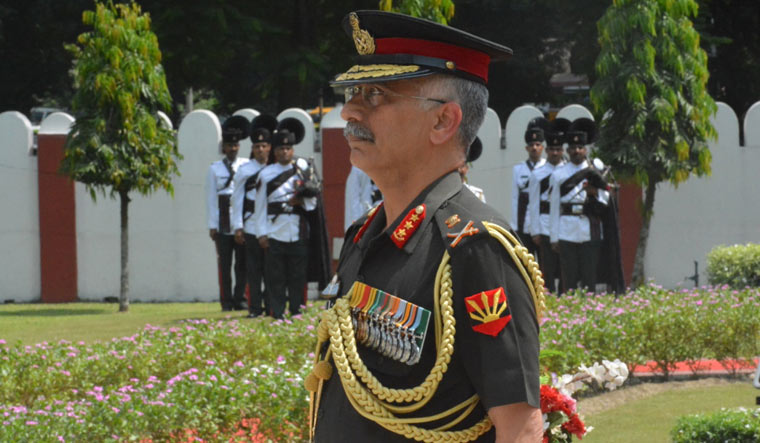 At a crucial time when the insurgents are regrouping in neighbouring Myanmar, a northeast specialist Army officer has been given the charge of the Eastern Command.

Lieutenant General Manoj Mukund Naravane replaced Lieutenant General Abhay Krishna as the General Officer Commanding-in-Chief (GOC-in-C) of the Eastern Command even before the latter's tenure was to end. The decision was taken last month but kept confidential.

Lt Gen Krishna is one of the very few officers of the Indian Army, who remained only a few months as the commander of the Eastern Command, headquartered at Fort William in Kolkata.

Lt Gen Krishna was transferred at a time when the Indian Army has been facing the worst ever credibility crisis in the northeast. The Supreme Court recently came down heavily on the Army when it said criminals were roaming free in Manipur, while ordering a CBI probe into the 1,528 alleged fake encounter cases in the state. Meanwhile, in a rare display of disunity, a good number of Army officers moved the Supreme Court demanding that the action initiated against them be withdrawn immediately.

According to Army officers, Naravane's major challenge would be to bring back the morale of the force. "We hope he would do all the needful to unite the force," said an officer.

Naravane is a highly decorated and accomplished professional. He was commissioned into the seventh battalion of the Sikh Light Infantry in June 1980. He passed out from both National Defence Academy and Indian Military Academy. Known to be a counter insurgency specialist of the Army, Naravane, apart from serving in Jammu and Kashmir, had spent considerable time in the northeast in his last 38 years of service.

Naravane commanded the Rastriya Riffles in J&K and has been the Inspector General of the Assam Rifles, posted in insurgency-ridden Nagaland, looking after both Nagaland and part of Manipur. He commanded the eastern brigade of the Infantry as well. What made him more special for the job was that he commanded the Strikes Corps of the Indian Army and was the Indian Defence Attache in Myanmar. With the changing scenario in Myanmar, where insurgent groups are now regrouping to strike against Indian Army, Naravane's job is cut out and would be extremely challenging.

What is more interesting is that the officer at the hot seat is still a student. He is pursuing his Ph.D in Punjab University, Patiala in Defence and Management Studies.