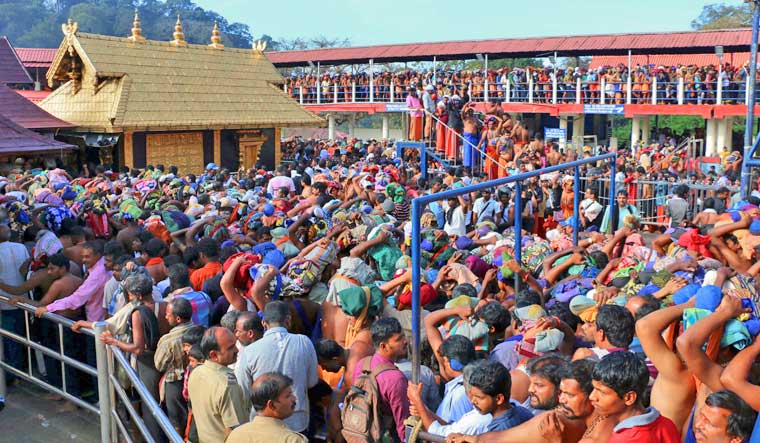 Putting an end to centuries-old tradition, the Supreme Court on Friday lifted the ban on women of menstrual age from entering the Sabarimala temple, deeming it unconstitutional and contrary to the religious freedom of women.

The landmark 4:1 verdict, lifting the ban on women in the age group of 10-50, was delivered by a five-judge constitution bench headed by Chief Justice of India Dipak Misra. Four judgments were delivered, with Misra writing on behalf of himself and Justice A.M. Khanwilkar. Justices R.F. Nariman and D.Y. Chandrachud penned separate, though concurring, judgments. Justice Indu Malhotra, the sole woman judge on the bench, however, gave a dissenting judgment favouring the ban, and even said that the petition does not deserve to be entertained.

The majority view, expressed by the bench, was that the ban is in violation of women's fundamental right to religion and worship as enshrined under Article 25 of the Constitution.

Misra's judgment noted that while faith and religion do not countenance discrimination, religious practices are sometimes seen as perpetuating patriarchy, thereby negating the basic tenets of faith, gender equality and rights.

“Patriarchal rules have to change. Patriarchy in religion cannot be allowed to trump right to pray and practise religion,” he wrote. The judgment noted that the right to worship guaranteed under Article 25(1) has nothing to do with gender or, for that matter, certain physiological factors, specifically attributable to women.

“Women of any age group have as much a right as men to visit and enter a temple in order to freely practise a religion as guaranteed under Article 25(1),” Misra wrote. He stated that the Article dealt with not just inter-faith parity but also intra-faith parity.

Justice Chandrachud wrote in his judgment that religion cannot be used as cover to deny rights of worship to women and pointed out that it is against human dignity. “To exclude women from worship by allowing the right to worship to men is to place women in a position of subordination. The Constitution should not become an instrument for the perpetuation of patriarchy,” he wrote.

Justice Nariman, in his concurring judgment, wrote that to exclude women of the age group of 10-50 from the temples is to deny dignity to women. “To treat women as children of lesser god is to blink at the Constitution,” he noted.

“The fundamental rights claimed by the thanthris (priests) and worshippers of the institution, based on custom and usage under the selfsame Article 25(1), must necessarily yield to the fundamental right of such women, as they are equally entitled to the right to practise religion,” he wrote.

Justice Indu Malhotra struck a dissenting note, saying that notions of rationality cannot be brought into matters of religion. She wrote in her judgment that the courts could not decide on the legality of religious practices unless in special cases, where social evils like Sati were involved.

“Issues of deep religious sentiments should not be ordinarily interfered by the court. The Sabarimala shrine and the deity is protected by Article 25 of the Constitution of India and the religious practices cannot be solely tested on the basis of Article 14,” she wrote. She cautioned that the Sabarimala verdict would have wide ramifications, beyond the shrine.

Malhotra stated that religious practices cannot solely be tested on the basis of the right to equality. It is up to the worshippers, not the court to decide what is religion's essential practice.

The court's verdict came on a public interest litigation (PIL) filed by Indian Young Lawyers Association. Intervenors in the case, who demanded an end to the practice of exclusion of women, did so with regard to issues such as gender equality and menstrual discrimination.