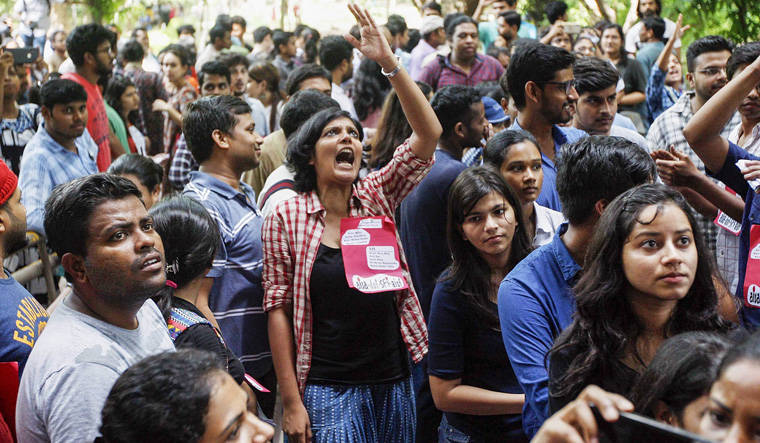 Violence marred the Jawaharlal Nehru University students' union (JNUSU) polls, as the RSS-affiliated ABVP and the left parties accused each other of fomenting trouble. The left parties even alleged that an attempt was made to kidnap a woman member outside the university. The Akhil Bharatiya Vidyarthi Parishad (ABVP) claimed their activists were assaulted by the left bloc. "We were 25 in number and they were 250. They assaulted one of our members and he is currently in hospital. Some of their women members even tore the clothes of some of our women members," the ABVP claimed.

The SFI-AISA goons brutally assaulted the #JNU students demanding the free & fair counting of the ballot papers. Leg fracture, torn clothes tell all about the JNU left. This is how they react when faced with strong political challenge. #JNUelections2018 pic.twitter.com/g3VWeKYaZS

This happened outside the School of International Studies where the counting of votes was then underway. Meanwhile, the left members accused the ABVP members of attacking them in the evening and making an attempt to kidnap them around 10.30pm.  "While coming from the police station after registering a complaint against the goons of ABVP who violently attacked us, four men started assaulting us from all corners," alleged a woman member of the left bloc.

She claimed they were armed. Meanwhile, the left also claimed ABVP members were stationed inside the campus armed with sticks, a charge denied by the ABVP. Police said they are stationed at all gates of the campus. They denied receiving any complaints so far.

Counting of votes was suspended for over 14 hours on Saturday, as election authorities cited "forcible entry" and "attempts to snatch away ballot boxes" at counting venue, after the ABVP staged protests claiming it was not informed about the start of the process.

The counting, which was suspended at 4am, resumed at 6.30pm after two teachers from the grievance redressal cell were appointed as observers for the exercise, officials said. "The election committee had resumed counting process at 6.30pm. Counting agents for central panel for combined science schools and special centre remain same. Observers of the election committee will testify for the transparency in which the ballots were counted," the election committee said.

According to figures available, the left and the ABVP are locked in a close fight on the central panel posts of president, vice president, secretary and joint secretary, with the left leading on all fronts.

Besides the left bloc, there are candidates of ABVP, NSUI (National Students' Union of India) and BAPSA (Birsa Ambedkar Phule Students Association).