Leaders from within the BJP and its allies voice their protests 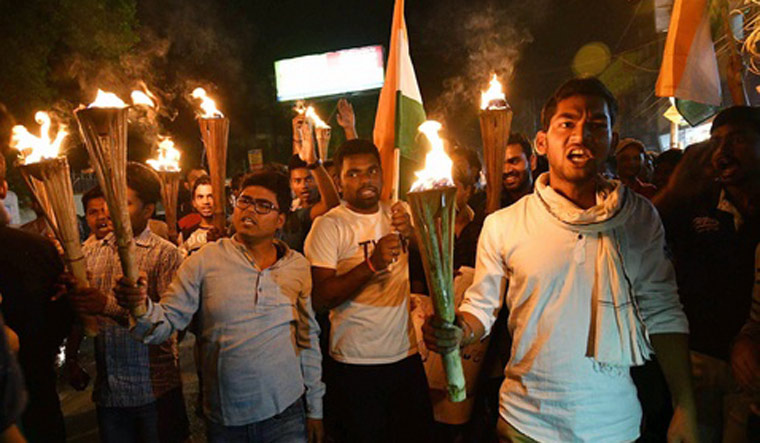 The Centre’s amendment to the SC/ST Act has been drawing widespread protests in Uttar Pradesh, with leaders from the ruling BJP, including an MLA, and even its allies joining the protests, besides the common people.

The locals of Sonbarsa, a village in the eastern-most district of Balia, has adopted a novel way of protest by putting up hoardings asking MPs, MLAs and other leaders not to enter the villages to ask for the votes in the upcoming Parliament polls. The hoardings read: “yeh gaon savarno ka hai, SC/ST act ka samarthan kerne vale rajnitak Dal aur neta vote maang ker sharminda na kere" (This village is that of upper caste people. Political parties and leaders, who support the SC/ST Act, should not ask for votes and embarrass the villagers). The youths of the village are even campaigning for NOTA ('None of the above' ballot option) and apprising the villagers about its efficacy.

The villagers have accused the leaders of changing their stance once they are in power. The amendments in the act have opened a new route to blackmail the upper caste people, the villagers alleged.

Soon after the central government came out with the amendments in the SC/ST Act, people and even leaders from the upper caste started opposing it. There were opposing voices from within the BJP. First, its senior leader Kalraj Mishra—a brahmin by caste—lodged his dissent. Surendra Singh, another upper caste MLA from Baria region in Balia, said he was against the changes in the act and "will keep opposing it".

Cabinet minister Om Prakash Rajbhar, a leader of BJP’s ally Suheldev Bharatiya Samaj Party, said that by amending the act the BJP has touched a live wire. He warned that the BJP was likely to face the repercussions in the upcoming Parliament polls.

Meanwhile, the members of upper caste communities from Agra, too, protested against the act. They had called a ‘Mahapanchayat’ in this connection in Samera village, but the local administration did not allow it to take place.