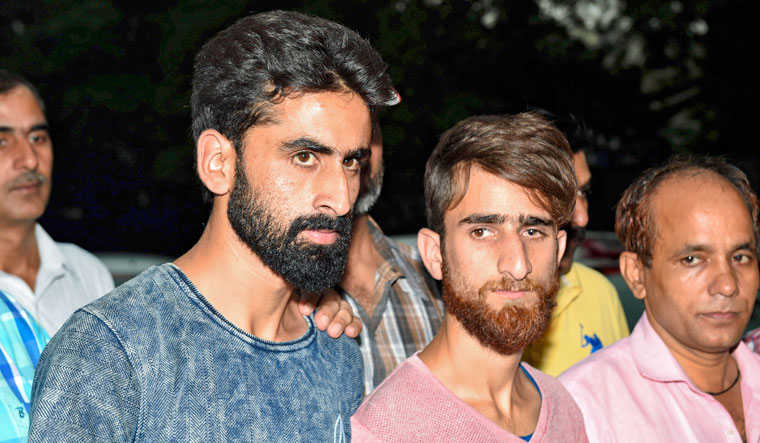 The Islamic State graffitis on walls and IS flags in downtown Srinagar have slowly grown into more overt demonstrations of IS allegiance during the funeral of slain terrorists in the last couple of years. Today, the glorification of the funeral processions of terrorists, disenchantment with the separatists, and social media becoming the gateway to the world for the disgruntled Kashmiri youth, where likes of Zakir Musa, Hizbul Commander Riyaz Naikoo and Lashkar’s Naveed Jaat have become virtual heroes, have given rise to a new form of militancy.

While Jaat fled police custody early this year and is accused of killing journalist Shujaat Bukhari, Naikoo is a tech savvy commander of Hizbul and the most wanted militant in the valley. Musa floated the Ansar Ghazwat-ul-Hind, an Al Qaeda affiliate after he split from Hizbul. All three are being hailed in funerals of slain terrorists and have become an inspiration to youth to pick up arms.

“The concern is that these terrorists are no longer limiting themselves to the valley. They want to carry out attacks across the country to make their voices heard and further their agenda,” said a counter terror official.

The recent arrest of two IS terrorists—Parvaiz Rashid Lone alias Shahid and Jamsheed Zahoor Paul, both residents of Shopian, from the national capital on Friday needs to be seen in this context of the growth of radicalisation in the valley, which does not need training grounds, motivated speeches or sponsorship of any kind, but feeds on the young disgruntled and largely jobless population.

According to senior intelligence officials, radicalisation of youth in Jammu and Kashmir has taken place in leaps and bounds in the last couple of years, and what is worrisome is that this time the threat is not so much from the Pakistan sponsored terrorists but these self motivated radicalised youth owing allegiance to various groups like the Islamic State, to carry out terror acts in the valley and different parts of the country.

Rashid joined militancy after his younger brother, Firdous Rashid Lone alias Abu Umeer was killed in an encounter by security forces on January 24, 2018. Rashid is an engineering graduate and was pursuing M. Tech. But life changed for him when the security forces declared a Rs 3 lakh reward on his brother, who had joined militancy after being influenced by radical elements in September 2016. After his brother, alongwith one Sameer Ahmed Lone, was gunned down by security forces, Rashid agreed to procure the weapons to carry out the deadly plans being hatched by the Islamic State in Jammu and Kashmir (ISJK). Jamsheed belongs to the same village as Rashid and is in the final year of engineering diploma.

According to police sources, the head of ISJK—Omar Ibn Nazir and his deputy Aadil Thoker (both identified as Emir and Nayab Emir of ISJK, respectively in the encrypted messaging applications), had instructed the duo to procure sophisticated weapons to carry out strike in the valley. ISJK is in its nascent stage and is a close knit group of trusted and verified members. Recently, four members of ISJK were killed in an encounter in J&K.

Friday's operation to nab Rashid and Jamsheed was well planned and was carried out by the special cell after it developed inputs through reliable sources that some sleeper cell members of ISJK are frequently visiting Delhi for onward travel to Uttar Pradesh. The inputs revealed that these terrorists were procuring sophisticated weapons through their contacts in UP and were using Delhi as a transit point. In fact, in the past, these sleeper cells had even managed to deliver an arms consignment to ISJK cadres. Through manual and technical intelligence, a team of special cell officers of the Delhi Police led by Inspector Kailash Singh Bisht and Inspector Sunil Rajain under the supervision of senior officers planned an operation to bust the module this time.

The first information arrived on Thursday evening, that Rashid and Jamsheed had picked up the arms consignment from UP. The sources informed the police that this was to be used for carrying out terror strike in J&K. The only chance the police had to nab them was when they would arrive at the Netaji Subhash Park, near Lal Quila to travel to Kashmir at about 11pm. A trap was laid outside Netaji Subhash Park gate and in a swift operation, both the militants were apprehended. Two Pistols of 7.65 mm caliber with 10 live cartridges and four mobile phones were recovered from them.

However, the arrests of the two youth is only the tip of the iceberg. Security forces say the numbers may be less or even in single digits for the ISJK, but there is a foothold of groups like Musa's Ansar Ghazwat-ul-Hind and the cadres keep shifting between ISJK and Musa's outfit.

The new ideology is not the one that the separatists in the valley had once ridden on, pointed out a senior officer, but it is a new space in J&K where both the IS and Al Qaeda ideologies are influencing the youth, riding on the Islamist sentiment around the world. Pakistan, on its part is trying to encash on this local uprising, said a counter terror official.

On Saturday, another militant, apparently belonging to ISJK was shot dead by unidentified gunmen. He was identified as Asif Nazir Dar, a resident of Panzgam area of Awantipora (in south Kashmir’s Pulwama district), a police spokesman said. It was claimed that Dar was active since January 2017, where initially he had joined the Hizbul Mujahideen but later got associated with the Eisa Fazili group of terrorists,” the spokesman said. It may be recalled that Eisa Fazili alias Eisa Roohullah al Kashmiri was the son of a Kashmir University employee, who was killed in an encounter with security forces in Anantnag in March along with two other associates. The ISJK owned up the three militants while also claiming responsibility for the attack on the police guard post at the residence of a Hurriyat Conference leader. Security officials pointed out that the first attack that ISJK claimed responsibility was in November 2017 when a sub inspector was shot dead and a PSO was injured in Zakura area of Srinagar.

Recently, the National Investigation Agency busted an IS module in Hyderabad with the arrests of 24-year-old Mohammed Abdullah Basith, and 19-year-old Mohammed Abdul Qhadeer. The investigating agencies are now probing the links between the IS sleeper cells in the valley and other parts of the country as these seem to be having a symbiotic relationship, lending support and gradually furthering the IS agenda by roping in radicalised youth across the country.

Security officials pointed out that apprehending terrorists is only half the battle won. What is required is a strong counter narrative strategy to discredit these groups who are recruiting the locals and using religion to further their nefarious designs. “What is lacking at the moment is a strong counter narrative and this is where New Delhi needs to intervene and assist the security forces on the ground,” said an official.

He has completed B. Tech in Civil Engineering in 2016 and was pursuing M. Tech in Uttar Pradesh. In September 2016, his younger brother Firdous Lone initially joined Hizbul Mujahideen and later joined ISJK. In January, Firdous Lone was killed during a shootout with the security forces at Shopian. In April 2018, accused Parvaiz has delivered one 9mm pistol to a contact of Asif alias Omar Ibn Nazir, the current chief of ISJK. Parvaiz brought this pistol from Didauli, UP through his contacts.

He is pursuing Diploma in electrical engineering from J&K. During the cremation of Sabzar Bhat in April 2017, he met one Shaukat, a resident of Tral, whose brother-in-law Owais was an active militant at that time (later killed in an encounter). Owais further introduced him to Asif alias Omar Ibn Nazir. He was in regular contact with Asif alias Omar Ibn Nazir for the last eight months through encrypted messaging applications. Jamsheed also facilitated the stay and onward travel of terrorist Abdullah Basit (arrested by NIA) in Delhi on the directions of Omar Ibn Nazir. During late June, accused Jamsheed met Nazir and Aadil Thoker on the outskirts of Panchgaam village in Pulwama, J&K for chalking out modalities of transferring arms consignment to ISJK cadres.