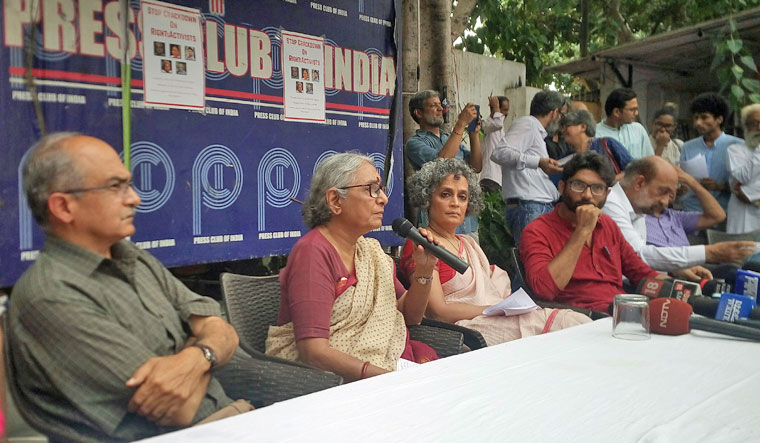 Outraged over the arrest of five activists in connection with the Bhima Koregaon violence, the civil society on Thursday came out strongly against the Narendra Modi government, accusing it of carrying out the arrests to muzzle political dissent and stating that the ruling dispensation has coined the term 'urban naxal' to isolate its critics.

The activists issued a joint statement and addressed a press conference to condemn the arrests as also the raids carried out on August 28. “These are only the most recent arrests in a continuing wave of repression spearheaded by the police at the behest of their political leaders and their communal and casteist agendas against people's movements and human rights defenders,” they said in the statement.

They also stressed that a generic narrative of urban Naxalites is being circulated, which refers to support or association with Naxalite organisations and alleged plotting of assassinations, to create a climate of terror where members of civil society will hesitate to protest and dissent.

Addressing the media, civil rights activist Aruna Roy said that the arrests were a representation of Constitutional breakdown and were a message from the government that if anyone speaks for the Adivasis, Dalits or minorities, action would be taken against him or her. “They want to convey the message that if you are opposed to their ideology and if you express yourself, you will be attacked,” she said.

Roy sees the arrests as a diversionary tactic meant to take the attention away from what she said was an alarming dip in Modi's popularity. She said she expected a circus of arrests, lynching and attacks on civil society in the run-up to elections. “Divide and rule is old. Now, it is divert and rule.”

According to senior lawyer Prashant Bhushan, the term urban Naxal was being used to describe people who stood up for victims of atrocities. “I am called an urban Naxal... Police had the courage to use this term again when they were seeking remand of those arrested,” he said.

Dalit rights activist Bezwada Wilson said that the government was systematically creating an atmosphere of fear and robbing the citizens of their fundamental rights. “The idea is to terrorise people, so that they do not stand up for Dalits or other marginalised people,” he said.

Gujarat MLA and Dalit activist Jignesh Mewani said the arrests showed that Modi was now imposing the 'Gujarat model', which he said was a combination of Emergency and fascism, on the entire country. He also said that the BJP regime wanted to discredit the Dalit movement by putting the stamp of Naxalism on it.

Mewani announced that Dalits would hold nationwide protests against the Modi government on September 5. He said that a Lalkar Parishad, taking off from Elgar Parishad, would be held in 20 states on September 15.

Besides seeking immediate withdrawal of FIR and release of those arrested in the Bhima Koregaon case, the activists demanded withdrawal of all cases filed against them under the Unlawful Activities Prevention Act, as well as unconditional repeal of the law.