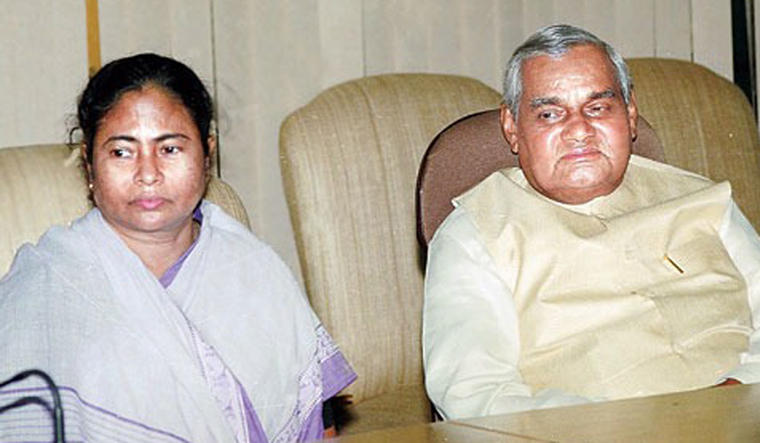 West Bengal Chief Minister Mamata Banerjee was desperate to reach Delhi in the morning of August 16 itself. Death of Atal Bihari Vajpayee had not been announced yet. This was her show of devotion to the man who saved her political career 16 years ago.

The West Bengal chief minister is at the peak of her political career now, but there was a time when she was left without a portfolio despite being a minister, and it was Vajpayee who saved her.

Banerjee, who was the the railway minister in 2001, jumped off the BJP ship alleging corruption in defence ministry's coffin purchase for Kargil martyrs. She demanded the resignation of then defence minister George Fernandez.

Fernandez, who wielded power, tried to get in touch with Banerjee at the insistence of Vajpayee. But Banerjee refused to pick up his calls, sources said. The defence minister then called up Mamata Banerjee's trusted lieutenant, Sudip Bandyopadhya. Sudip assured Fernandez of a hearing with Banerjee, but by then Fernandez had to resign.

Known to be another honest and legendary socialist, Fernandez's ouster from the NDA government did not go down well with his associates like Nitish Kumar, Sharad Yadav and Ram Vilas Paswan. The trio put huge pressure on Vajpayee not to accept the resignation of Fernandez. But something had transpired between Vajpayee and Fernandez, which doused the fire for sometime and Fernandez agreed to resign.

The resignation of the defence minister was not enough for then railway minister Mamata Banerjee. She broke the alliance with the BJP and joined the Congress before the 2001 assembly election in Bengal. This was at a time when Jyoti Basu had hung up his boots to pave way for Buddhadeb Bhattacharjee in West Bengal. After her exit, Fernandez was taken back to the NDA government.

Banerjee calculated that with the change of guard in the BJP and the Basu charisma missing in the election, it will be her opportunity to break the jinx in Bengal in 2001. And, the BJP could prove to be a burden for her in a state which has 28 per cent of Muslim population.

But her calculations were wrong. The alliance of the Congress and Trinamool Congress was routed in the election. Ajit Panja, who was the minister of state for external affairs in Vajpayee's ministry, had resigned from the ministry with Mamata Banerjee. After Banerjee's election rout, Panja revolted against Banerjee calling her "power-hungry" and "desperate". When I met Panja at his house in Kolkata, he told me, "Mamata's biggest problem is she wants power. But she can't carry it."

He went on to say, "I am sure if she goes back to Vajpayeeji, she would be re-inducted into the party. But she will lose the grace she perhaps would have had otherwise. It was a big blunder on Mamata's part." Panja's outburst got him suspended from the Trinamool Congress.

Banerjee was reclusive after the defeat in 2001. Many of her partymen deserted her for her decision of severing ties with Vajpayee. Banerjee had no other option but to go back to NDA in December 2003.

But there was huge resistance from the NDA partners and leaders made a beeline to Vajpayee's office not to re-induct Mamata Banerjee into the coalition. Fernandez was the first to oppose. Nitish Kumar, who replaced Banerjee as railway minister, strongly disapproved Banerjee's return. Even L.K. Advani sided with the lobby against Mamata Banerjee. Vajpayee then engaged his man Friday Promod Mahajan. Mahajan brought peace and Banerjee was re inducted into the NDA government after Vajpayee made a special appeal to all NDA partners.

Banerjee got a life in national politics but had to stay as a minister without portfolio for many months. Only four months before the general election in 2004, she was made minister for coal and mines.

After the defeat in 2004 election, Atal Bihari Vajpayee said goodbye to politics. Things became hard for Banerjee to continue in the NDA as leaders were unhappy with her outbursts against one of the most respected seniors, George Fernandez. Even today many find it difficult to accept it.

Finally, Mamata Banerjee quit NDA again and apparently for the last time. Today she is at the forefront of the opposition's war against the BJP. However, none could deny the fact that it was Vajpayee who gave her much needed oxygen to come back to politics at a desperate time.