Strikes, courting opposition leaders: Doctors up the ante in protest against NMC Bill 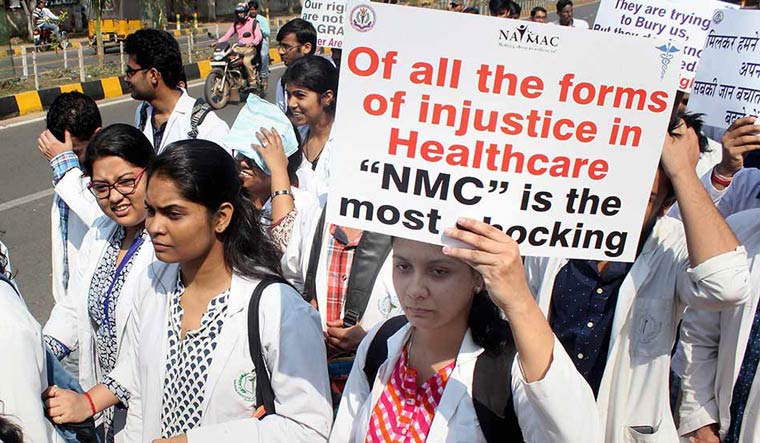 Doctors have upped the ante in their protest against the contentious National Medical Commission Bill, 2017. The bill, expected to be tabled in Lok Sabha by J.P. Nadda, minister for health and family welfare, on Monday, has been facing stiff opposition on several grounds.

On Saturday, services at private hospitals and a few government hospitals are expected to be hit because of a nationwide strike called by the Indian Medical Association (IMA). The IMA has been at the forefront of the protests against the proposed law that was introduced in Lok Sabha in December last year.

Following fierce opposition to the bill by the doctors' body and the ruling party's own MPs in the lower house, the Centre was forced to refer the bill to the parliamentary standing committee. The committee gave several recommendations, some of which were incorporated in the revised version of the bill.

However, members of the IMA, and other associations of doctors, contend that their reservations have remained largely unaddressed.

In December, after the bill was introduced, the IMA succeeded in mobilising the ruling party MPs to oppose the bill. This time round, however, their strategy includes courting opposition leaders as well. These leaders are expected to stall the bill in Rajya Sabha as the ruling party has the numbers in Lok Sabha.

A case in point is the expected participation of prominent leaders such as Congress presdeint Rahul Gandhi, leader of opposition in Rajya Sabha Ghulam Nabi Azad, parliamentary standing committee chairperson Ram Gopal Yadav and CPI(M) general secretary Sitaram Yechury at a protest meeting to be held in New Delhi on Sunday.

"We have no issue with dissolving the MCI. But replacing the MCI with the National Medical Commission is no solution," said Harjit Singh Bhatti, president, Resident Doctors Association, AIIMS. Bhatti noted that doctors and medical students were opposed to the bill because it would render medical education inaccessible to the poor.

Doctors such as Bhatti are also agitating for a higher number of elected members within the National Medical Commission, removing the clause for a bridge course for AYUSH professionals, and clearing the air over the proposed exit exam for MBBS students.

"If the government does not listen to us, we might call for a total shutdown of health services," he said.