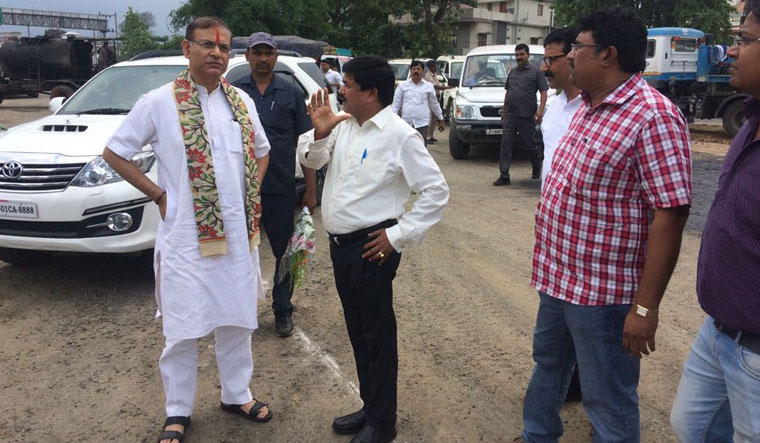 Union Minister of State for Civil Aviation Jayant Sinha faced a torrent of criticism on Friday after reports emerged of him garlanding eight people convicted of lynching a Muslim cattle trader in Ramgarh area of Jharkhand's Hazaribagh district in June 2017. Sinha is the MP for Hazaribagh.

The eight men were part of a group of 11 gaurakshaks who were convicted of the murder of Alimuddin Ansari, a cattle trader, in March this year. The incident was the first-ever conviction in a case of lynching by gaurakshaks. However, on Thursday, the life sentences of eight of the convicts, including a local BJP leader, Nityanand Mahato, were suspended by the Ranchi High Court.

According to media reports, upon being released, the eight men went to the house of Sinha, where the minister garlanded them and posed for photographs, which have since gone viral. Another local BJP leader also accompanied the group to Sinha's house. Shankar Choudhary, a local BJP leader, claimed the party was planning to organise a procession with the freed gaurakshaks in Ramgarh.

This is truly despicable. @Harvard Your alumnus @jayantsinha felicitating the accused in cow related lynching death in India. Is this what @Harvard stands for? https://t.co/DJh8XRtoXl

Sinha had spoken in favour of the convicts at the time of their trial, claiming there were discrepancies in the evidence against them. He had even sought a CBI probe in the case.

The circulation of images of Sinha with the group on Friday triggered outrage on social media. Political parties alleged Sinha, and the BJP, were patronising the gaurakshaks for the sake of electoral benefits.

Hemant Soren of the Jharkhand Mukti Morcha, who is leader of opposition in the Jharkhand Assembly, tagged Harvard University in his tweet condemning the incident as Sinha is its alumnus. Incidentally, Sinha is one of the most educated ministers in the Narendra Modi government, having studied at IIT and Harvard having also worked in the corporate sector.

The Youth Congress slammed Sinha for felicitating the gaurakshaks at a time when 27 people had died in incidents of mob lynching in recent weeks across the country.