Modi's visit to Indonesia: Can both countries strike 'a fine balance' ? 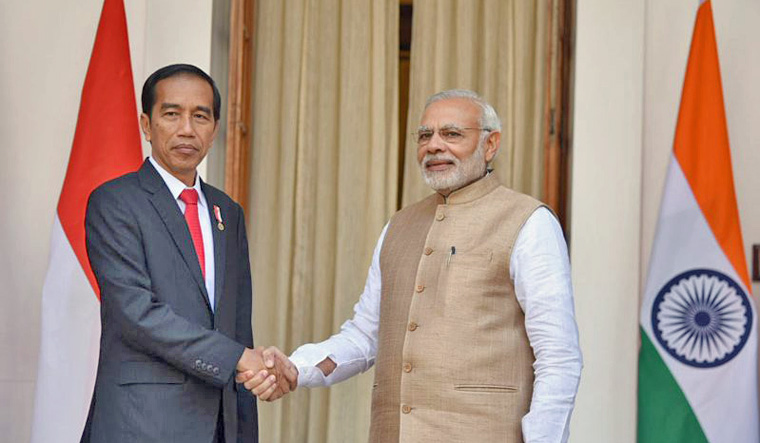 “A fine balance”, is what Indonesia believes a closer cooperation with India will achieve. The largest archipelago in the world is in the midst of perhaps, one of the world's most volatile regions, straddling between the Indo-Pacific and the South China Sea.

At a public lecture held at the Nehru Memorial Library, Luhut Pandjaitan, co-ordinating Minister for Maritime Affairs of Republic of Indonesia said: “Closer cooperation is important for balance of power in the region. We are very powerful if we work together.''

Strategically, important—and close to China, which is now asserting itself in the South China Sea by building artifical islands—Indonesia has a lot at stake in keeping tensions in the area at the minimum. Over $5 trillion of trade pass through the choke points in the area and it is important for Indonesia to ensure that there are no flare-ups. “The stability of the South China Sea is very important,'' said the minister.

Indonesia under President Joko Widodo—who has similarites with Modi—has been trying to push for more investments. Like, Modi, he has his own version of 'Make in India' for Indonesia, and has been building infrastruture projects. In terms of foreign policy, he has discovered the need for a maritime policy to maintain Indonesia's importance in the world especially as China has started asserting power in the region. Indonesia wants India to be that partner, to strike a fine balance.

Pandjaitan is on a two-day visit to the capital ahead Prime Minister Narendra Modi's visit to Indonesia later this month. A large business delegation has traveled with him. He has met the civil aviation minister—Indonesia is very keen to follow the Indian model of no-frill airlines—the transport minister as well as the commerce minister. A meeting with the NSA Ajit Doval and the minister of external affairs was also scheduled.

It is believed that Modi on his trip will visit Sabang—a city off the coast of Sumatra. During World War II, it is believed that Subhash Chandra Bose landed on the island to ensure that he wasn't caught by British spies. More than just history, it is also a strategically important area for the Navy as the region have a deep port that goes down 25 metres. For India, looking for an alternate route and a port, it could prove to be an asset. “This is my personal opinion, I think when you are present in Sabang, this could help in the balance of power. The plan of Prime Minister Modi to have a hospital and to have a sea port also is a very good plan. It is a deep port and is close to the canal...we would like to see the balance of power, an equilibrium,'' he said.

India and Indonesia might share historic links—that goes back 2,000 years—but these ties have largely been lost in the age of modern diplomacy. With Modi scheduled to visit the country later this month, it is hoped that there will be a new understanding between India and Indonesia—so as to keep the dragon from breathing fire. “Indonesia is too big to lean towards any super power. We like to be independent.''

Trying to walk the tightrope with the Chinese, Indonesia too, like India, doesn't want to be part of the Belt and Road Initiative. But a closer security cooperation in the region is on the cards for both. Maybe a tie-up with the coastguards, like Indonesia wants. The question is can India and Indonesia rediscover their old links and go beyond?