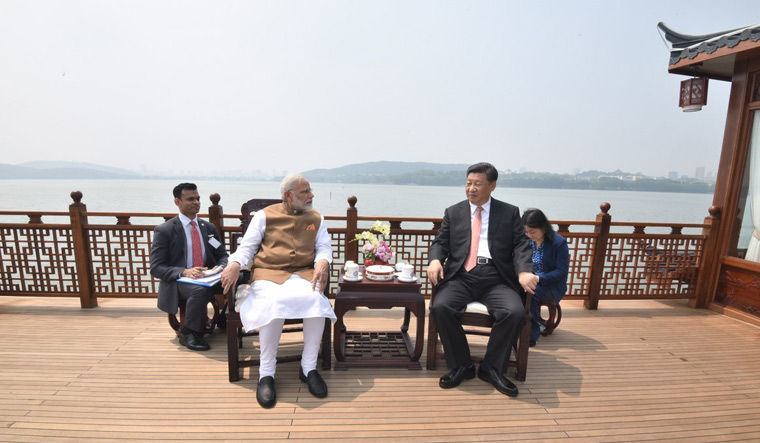 The techno-strategic characteristics of the nuclear weapon, whose apocalyptic destructive capability was first demonstrated at Hiroshima in August 1945, has ensured that there is an inextricable link between geopolitics and the nuke. This is evident in the manner in which the current geopolitical tension over the Iran and the Korean peninsula imbroglios have a nuclear sub-text.

By extension, India’s geopolitical profile has been shaped by the nuclear issue in a very distinctive manner and this has become more definitive after the Pokhran-II nuclear tests of May 11 and 13, 1998. Thus Pokhran2@20 is an opportune moment to review geopolitics and the nuclear strand.

The Cold War (1946—1991) and the bipolar divide between the US and the USSR provided the overarching global strategic framework where nuclear weapons and missiles, or WMD (weapons of mass destruction), were critical determinants. Within this system, Asian geopolitics was more complex in relation to the nuclear strand.

The first atomic weapon was dropped on Hiroshima in August 1945 by the US, thereby scarring the continent in an irrevocable manner. The anxiety that another Hiroshima (or Nagasaki) could happen, and therefore had to be prevented, has never been erased from the collective consciousness of major Asian powers.

Subsequently, after the enormity of Hiroshima-Nagasaki, Japan was provided a nuclear umbrella by the US on condition that Tokyo renounce nuclear weapons in perpetuity. This was the foundation for the emergence of a pacifist Japan that focused on postwar nation-building.

East Asia was further roiled by the Korean War (1950—53) and the US and the communist powers (USSR and China) were on opposite sides of the divided peninsula. The nuclear strand was invoked by the US against China (which did not have the capability at the time) during the Korean War, and it may be averred that Asian leaders were internalising these developments in their own manner. India was no exception.

China acquired the nuclear weapon in October 1964 and became the fifth member of the nuclear club, and this altered the regional geopolitical grid to India’s disadvantage. India sought to redress the situation and carried out its own nuclear explosion in May 1974—Pokhran-I—but described it as a peaceful nuclear explosion (PNE).

This ambivalence, wherein India chose to be opaque about its nuclear status continued till May 11, 1998, when under prime minister Vajpayee, India announced that it had become the sixth nuclear weapons state in the world. However, southern Asian geopolitics—that had to accommodate the two Asian giants, China and India—became more complex with the opaque strategic cooperation between China and Pakistan.

Beginning in the mid-1970s, soon after the birth of Bangladesh in December 1971, China provided support to the Pakistani nuclear weapons quest. A declassified 1979 CIA report refers to China providing technical support for Pakistan to acquire ‘nuclear blast capability’ and more recent disclosures have revealed that China offered Pakistan a nuclear warhead design in early 1990. The depth of this covert WMD cooperation between its two principal neighbours added to the complexity of the strategic challenge for India.

While India, and later Pakistan, demonstrated their nuclear weapons capability in May 1998 in an overt manner and became the sixth and seventh nuclear weapon powers, respectively, Asian geopolitics were further animated by North Korea and Iran, which had their own nuclear anxieties and aspirations. They had both signed the NPT and renounced the weapon but later reviewed this decision and went down the path of nuclear weapon acquisition with varying degrees of success. This was a rational decision driven by the objective of regime survival.

Thus, it would be appropriate to conclude that southern Asia—which includes China, India and Pakistan as declared nuclear weapon states and Iran as a potential power—has punctuated the geopolitical canvas in a significant manner. Currently, the US decision to pull out of the carefully brokered Iran nuclear deal on May 8 is likely to upset the regional geopolitical status quo and this, in turn, will impact India adversely.

In like fashion, East Asia that has the Korean-Japanese nuclear overhang is equally complex. Pyongyang declared itself a nuclear weapons power in October 2006 and has been disparagingly referred to as a nuisance power, but it has the potential to turn into a flashpoint, given the competing interests of the major powers, the regional actors and the emotive cross of history.

The US, Russia, China, Japan, South Korea and North Korea are all directly affected parties and while there has been a nascent thaw between the two Koreas, meaningful and verifiable ‘denuclearisation’ that the US and its allies are seeking may prove to be elusive. The Trump decision (May 8) to walk away from the Obama-led Iran nuclear deal will cast a shadow on the US-North Korea summit scheduled for June and trigger legitimate anxieties about the sanctity of negotiations and painstakingly negotiated nuclear 'deals'.

However, the Indian nuclear profile is in a class of its own and very different from what is at play in relation to the Iran and the Korean peninsula. India is a non-NPT signatory and after the US-India civilian nuclear agreement of 2005 led to a tentative rapprochement, a long estranged bilateral relationship became one of engaged democracies. Thanks to the sagacity of the Bush administration and the doggedness of then-PM Manmohan Singh, India was admitted into the global nuclear tent and this was enabled by the Pokhran-II decision.

Subsequently, the US prevailed upon the global nuclear community (September 2008) to accord Delhi an exceptional status in the global nuclear domain, whereby it stayed outside the NPT but was allowed to retain its nuclear weapons program. This was due to the acknowledgement that India is a responsible nuclear weapon power—an assessment that eludes Pakistan, North Korea and Iran.

India is located in the world’s most complex and opaque strategic environment where three proximate, declared nuclear powers have to manage a prickly/adversarial geopolitical relationship. The India-China dyad is prickly, but stable over the nuclear issue. However, the India-Pakistan dyad is inherently unstable, for Rawalpindi (the GHQ of the Pakistan Army that controls the nuclear arsenal in the country) has a stake in keeping the bilateral relationship with India hostile and in extended disequilibrium through the investment in terror.

A triangular nuclear dialogue between China, India and Pakistan is very desirable to ensure that the contours of the nuclear status quo are robust and crisis-proof. The nuclear weapon has altered the southern Asian regional geopolitical grid in an irrevocable manner. Managing it prudently, so that a Hiroshima-Nagasaki never occurs, is the challenge for the political leadership and the professionals who are the guardians of this apocalyptic capability.

This article is part of a series from THE WEEK on the 20th anniversary of the Pokhran-2 nuclear tests undertaken by the government of Atal Behari Vajpayee. The Pokhran-2 tests—which saw India test 5 nuclear weapons at Pokhran, Rajasthan on May 11 and 13, 1988—led to India declaring itself as a nuclear weapons state. This series covers archival materials on how THE WEEK covered the Pokhran tests in 1998, the preparedness of India's military in a nuclear age and the threat of terrorists getting their hands on 'dirty bombs'.