Despite Modi's promises, Ganga drying up in Varanasi 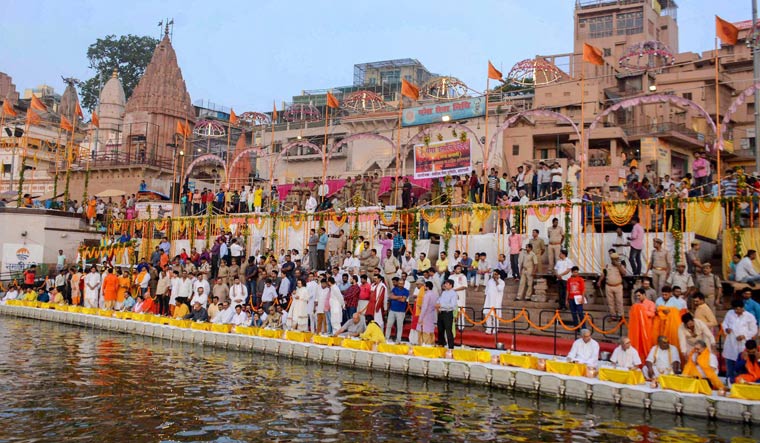 The existence of the holy river Ganga in the ancient city of Varanasi is again at stake, experts confirmed on Friday.

With the water level dropping to a drastically low level, the river is drying up at a rapid pace.

Experts have expressed concern and claim several contributory factors have led to the decline of the river.

In view of this plight of the Ganga, the district magistrate of Varanasi has written a letter to the Uttar Pradesh chief secretary to release water from the Naraura Dam or the Kanpur Barrage.

Yogeshwar Ram Mishra, DM Varanasi, said, "The water level of Ganga in Varanasi has gone down. We have requested to let off the water from Kanpur Dehat. The authorities have taken cognisance of this and they are doing what is needed."

"The plight of the Ganga has left people disappointed even after Prime Minister Narendra Modi promised to cure the river," said Hira Nand Pandey, purohit of the Dashashwamedh Ghat in Varanasi.

"Due to the shortage of water, Ganga's pollution has come to the surface. This season, it has remained less than 400 meters," he added.

Prime Minister Narendra Modi, who represents the Varanasi constituency in the Lok Sabha, had announced in June 2014 that Rs 20,000 crore would be allocated for cleaning up and revitalising the Ganga over five years. However, the Ganga clean-up project has been criticised for poor implementation.