Reach out, win over: Significance of Kovind's Mauritius, Madagascar tours 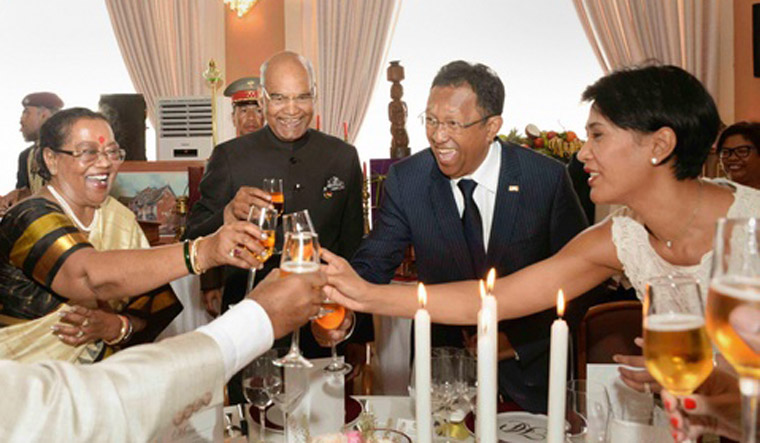 It may not have the glitz of Prime Minister Narendra Modi's foreign visits. President Ram Nath Kovind's first overseas tour of the year—to Mauritius and Madagascar—however, were significant as the country is reaching out to the Indian Ocean countries and tapping its diasporic ties. The visit came with many firsts.

The President toured these nations from March 11 to 16.

In Mauritius, he was chief guest at the island nation's golden jubilee of independence celebrations, a high honour. He also inaugurated the World Hindi Secretariat building as well as laid foundation stones for two important, India-aided projects—a social housing scheme and an ENT hospital.

The 11th World Hindi Conference will be held in Mauritius, and it is the only country apart from India which is hosting the conference for the third time. Hindi gets the push as it would help keep alive the diasporic ties. In fact, in his address to the diaspora, the President said India wanted to use disaporic networks for engaging with nations. Kovind pointed out that the language is being taught in 175 universities worldwide, thus becoming a “global language''.

Kovind was also the first VVIP from India to ever visit Madagascar, and the country marked this occasion by bestowing him with its highest honour to a non-citizen—the Grand Cross of the Second Class. More importantly, he handed a USD 80.7 million Line of Credit for agriculture and mechanisation to Madagascar. The President also inaugurated a centre for geoinformatics application in rural development, formed with the assistance of India.

Madagascar may be closer to the African coastline, but President Kovind put the Indian proximity in another perspective as he addressed a gathering of students at the University of Antananarivo. He told them that as per the International Seabed Authority, the undersea exploration zones of the two countries were “closest to each other''. Now, that is taking the friendly neighbourhood to another dimension, entirely. Madagascar is also slated to access a solar grant from the National Institute of Solar Energy in India for a pilot project.

India, which now perceives the Indian Ocean region as its area of dominance, knows it has to strengthen ties with member countries, specially the island nations, which can so easily succumb to China and its deep pockets. The Indian advantage over China in this region is the cultural, historic and diasporic connect.

In fact, Kovind began his foreign jaunts last year after taking over with African destinations. The countries were very carefully chosen—Ethiopia and Djibouti. China has been making heavy inroads into African nations, which India hopes to balance with its own diplomatic outreach. The Djibouti visit was the first from an Indian VVIP, and the Ethiopian visit was after a gap of five decades.

With China having built a naval base in Djibouti, India has realised it needs to act fast in Africa. Djibouti was an important country when India was evacuating its people from Yemen. Ethiopia continues to be the African nation which receives the largest Lines of Credit from India.

The Modi government has made a beginning by reaching out to African nations in a bigger way than before. The question now is: Is this enough? For clearly, India will have to up its efforts to just about balance the Chinese influence, if not overtake it.