India's strategic benefactor: France is emerging as the new Russia 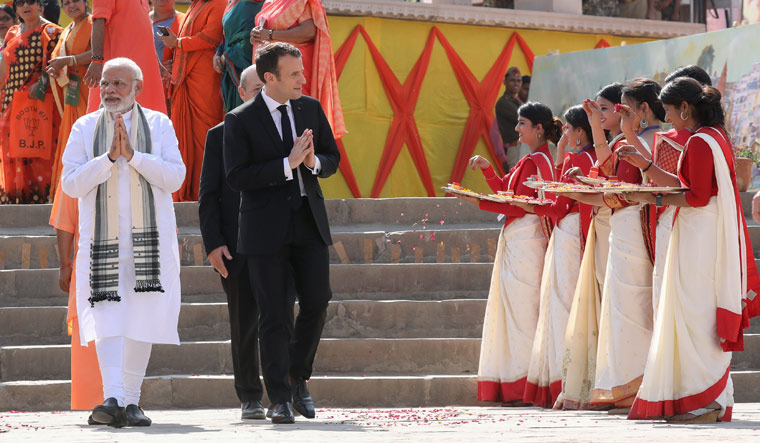 The young president's maiden India visit remained in the sunshine throughout, literally and figuratively. There was not a single glitch on either side, and trolls found nothing more than a strange expression on Macron's visage, caught at an odd angle during one of the many hugs the two shared, to make memes on. Even the Ganga sparkled in an a picture-perfect Namami Ganga avatar, if only for a few hours, as Macron and Modi ghat hopped in Varanasi.

While Macron didn't have throngs going gaga over him, the way Barack Obama did during his two visits, the Frenchman made an impact where it was required. At the formal dos. he was the soberly attired, business-minded leader. At the town hall with students, he rolled up his sleeves and posed for selfies. Even his pictures with wife Brigette at the Taj Mahal were different. No shots on the bench, instead a charming silhouette of the two holding hands and gazing at the monument of love. The French sure do things differently. And that was apparent throughout the four-day visit, packed with official engagements.

The two sides proudly announced signing business deals worth $16 billion during the visit. That most of this ($12.5 billion) was only SpiceJet buying engines and a 10-year service contract with French firm CFM doesn't matter much. The volume of trade between the two countries has always been modest (unlike our other European friend, Germany).

What mattered more was that the optics were right and everyone took notice of an old friendship that is becoming even thicker in a rapidly devolving world dominated by Brexit, Trump talk and China's ambitions. Take for instance Macron's simple comment that he wanted to double the number of Indian students in France, which now stands at a bare 5,000. It was enough for Boris Johnson, UK's foreign minister to smugly tweet that in 2017, his country issued student visas to 14,000 Indians. It is not lost on the British that France wants to make Paris India's entrepôt to Europe, post Brexit.

That Macron's visit came on the heels of the other French-speaking, liberal young leader who speaks of multilateralism and democracy, Justin Trudeau, made clear another point before the global audience. Sharing a global outlook was not enough to become BFFs (best friends forever) with India—respect for India's integrity was part of the deal. And the country should be important enough for India for its head of government to merit a personal airport welcome and curated India tour from Modi.

Macron co-presided over the International Solar Alliance's first summit, which had representations from nearly 50 member nations. France made the right noises, though it didn't actually commit anything in writing on specific technology transfers or even more finances, both of which the alliance is in need of. Macron and Modi as co-hosts is enough for other developed countries like Germany to seek an entry into this alliance at a later date. Right now, France is the only non-solar-rich member of the alliance.

“This is an India-initiated agreement, and it is still nascent. Its future will depend on how India manages to steer it, and get in what is required from the west. Right now, just the two leaders together on a platform itself is a strong global message,'' said Harsh Pant, distinguished fellow, Observer Research Foundation. That Macron's trip culminated with inaugurating a French-built solar park in Uttar Pradesh, the largest in the state, was a clear statement that the solar alliance can be a win-win situation for all and that there's business opportunity here.

The most talked-about outcome of Macron's trip is the agreement for reciprocal sharing of logistics at each other's military bases. This is a clear counter to China's growing footprint in global waters, whether it's snatching the South China Sea or intruding into the Indian Ocean through its strategically placed string of pearls. With the Indo-French agreement, India gets to spread more comfortably in the Indian Ocean, with logistic help at Reunion Island and even Djibouti where China has built its own base.

The agreement again, is more a posture improvement than a game-changer. “Even without the French, we have enough operational turnaround across ports in the Indian Ocean,'' said vice admiral (retired) A. K. Singh. Reunion Island is around 700 nautical miles from Port Victoria, Seychelles. And now India is in plans to build another port in that country. Similarly, India has logistics arrangements at Salalah in Oman, ever since it began anti-piracy operation in 2008. Now, Port Duqum has also opened to us.

France actually gets more operational room in the Indian Ocean now as we have more territory here, including our vast coastline. “The game changer will be when the two agree for real-time intelligence sharing on these waters.”

No one was actually expecting more defence deals on this visit. These take several rounds of negotiations, and it is not everyday that Modi gets to make an outright purchase of 36 fighter jets. But the fact that the joint statement mentioned the Make in India initiative as an opportunity for co-production of defence equipment in India means that negotiations for more Scorpene-class submarines, and even Indian production of Rafale jets are on. The statement even mentioned the negotiations on between DRDO and SAFRAN for the manufacture of engines under the Kaveri project for the indigenous Tejas fighter. This is an offset of the Rafale aircraft deal.

French technology, said Singh, was good, but very expensive, actually twice the cost of Russian equipment. France, like the US, is keen on a market for its technology. “With these deals, come the promise of support at international and multilateral fora, like memberships to the UNSC or nuclear control regimes.'' Singh said.

By signing an 'industrial way forward' agreement for the Jaitapur nuclear project, they even managed to keep on simmer the association on nuclear energy. Jaitapur will be the first French technology plant in India, and though the first agreement was finalised in 2010, the progress since has been slow. There are displacement and environmental issues for India and liability issues on the French side.

Macron's visit, however, was not so much a business expedition as it was aimed at reinforcing and re-energising the bilateral relationship, an objective well achieved.

“For India, France is emerging as the new Russia, when it comes to strategic partnership in the post-Cold War era,” said former foreign secretary Lalit Mansingh. “Our approach to Europe traditionally is through the prism of UK, France and Germany. With UK undergoing Brexit, and Germany having its own internal problems, France, under Macron, has emerged as as the face of the continent. France is very important for India's foreign policy right now.'' It surely helps that despite the age difference, the foreign policies of the two countries are being steered by two dynamic, popular leaders, who happen to be on the same page, said Mansingh.