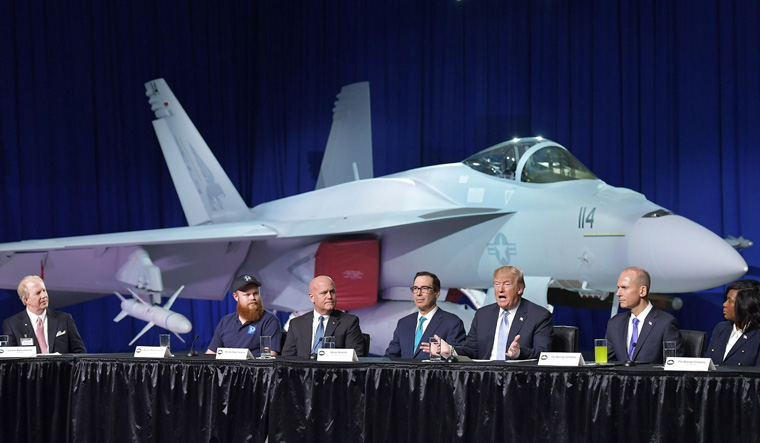 US President Donald Trump sitting in front of a Super Hornet fighter on a visit to the Boeing Company in St. Louis, Missouri | AFP

Early on March 15, media agencies carried reports on two different fighter 'procurements' for the Indian Air Force. One of the reports stated that the IAF had 'committed' to buy 201 Tejas variants once an 'improved' variant was developed and met its performance parameters, making for a total of 324 Tejases in the IAF.

Another report stated that the ministry of defence had asked the IAF to evaluate Boeing's F/A-18 E/F Super Hornet fighter for a purchase of at least 100 fighters, to be built in India, in a deal valued at approximately $15 billion.

At first glance, it is hard to decipher whether the two procurement plans have any relationship or, more importantly, whether they are complementary in nature. Not to forget where the IAF was going to come up with the funds to cover these possible acquisitions.

Coming to the Tejas. The Tejas programme is woefully behind schedule and, as of now, the IAF is buying a total of 123 Tejas jets in multiple batches, at an estimated cost of nearly Rs 75,000 crore. The 'improved' Tejas jets, currently referred to as Tejas MK-2, are expected to have newer engines, radars and increased fuel capacity.

The improved variant was warranted as the IAF wasn't satisfied with the original design's performance. However, an improved design would take around five years to be ready for service, given the need for extensive testing and qualification. The Tejas was meant to replace the MiG-21 and MiG-23/27 fighters, but the aircraft's age would be seriously showing by 2025-30—which is when the MK-2 should be entering full service, assuming all goes well.

With respect to the Super Hornet, the latest MoD instructions appear to be a repeat of what happened a decade ago when the IAF held a much-touted competition involving multiple vendors to buy 126 aircraft, which led to the French Rafale's selection. The medium multi-role combat aircraft (MMRCA) competition was keenly watched across the world. What is less well known, however, is the fact that the IAF initially raised a requirement for 126 Mirage-2000s shortly after the Kargil War in 1999, which subsequent governments decided to expand into a competition.

The 'current' competition comes three years ago after Prime Minister Narendra Modi junked negotiations to buy 126 Rafales and opted to buy 36 jets off the shelf. Boeing had offered the Super Hornet in the MMRCA competition, but it failed to match the IAF's technical parameters.

Leaving aside the technical merits of the Super Hornet or the Rafale or any other competitor, the question of precise time lines for the induction of these fighters and which company will partner with a chosen foreign supplier in India remain unanswered.

So in essence, the IAF seems to be back to where it was not 10 years ago, but arguably 20 years ago.