Covid nasal sprays may one day prevent and treat infection 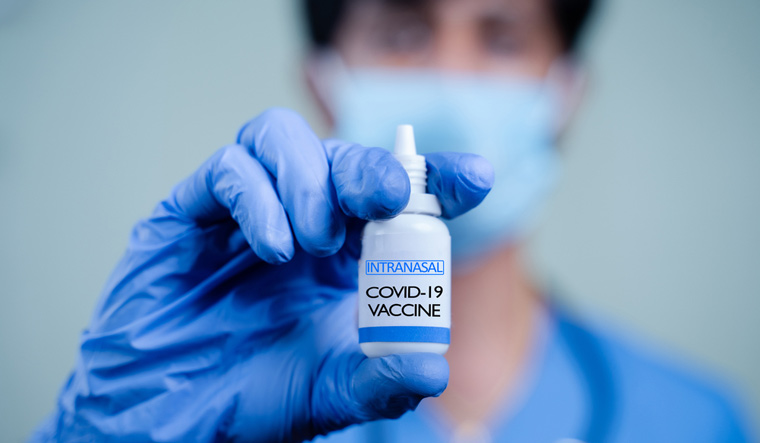 We have vaccines to boost our immune response to SARS-CoV-2, the virus that causes Covid. We have medicines you can take at home (and in hospital) to treat Covid. Now researchers are trialling something new.

Other researchers are looking at the potential for nasal sprays to stop the virus replicating in the nose, or to make the nose a hostile place to enter the body.

Here's where the science is up to and what we can expect next.

How could we block the virus?

Viral blockade, as the name suggests, is a simple premise based on blocking SARS-CoV-2. In other words, if something gets in its way, the virus cannot attach to a cell and it can't infect you.

As SARS-CoV-2 is a respiratory virus, it makes sense to deliver this type of medicine where the virus mainly enters the body via the nose, in a nasal spray.

There are various groups around the world working on this concept. Some research is still being conducted in the lab. Some agents have progressed to preliminary human trials. None are yet available for widespread use.

Heparin is a common medicine that's been used for decades to thin the blood. Studies in mice show that when heparin is delivered via the nose, it's safe and effective in preventing the virus binding to nose cells. Researchers believe heparin binds to the virus itself and stops the virus attaching to the cells it's trying to infect.

A clinical trial is being conducted in Victoria in collaboration between multiple Melbourne-based research centres and the University of Oxford.

Covixyl-V (ethyl lauroyl arginine hydrochloride) is another nasal spray under development. It aims to prevent Covid by blocking or modifying the cell surface to prevent the virus from infecting.

This compound has been explored for use in various viral infections, and early studies in cells and small animals has shown it can prevent attachment of SARS-CoV-2 and reduce the overall viral load.

This molecule, which is extracted from seaweed, acts by blocking virus entry into airway cells.

One study of about 400 health-care workers suggests a nasal spray may reduce the incidence of Covid by up to 80 per cent.

This is an engineered antibody that binds to SARS-CoV-2, blocking the virus from attaching to cells in the nose.

A nasal and oral (mouth) spray are in a clinical trial to assess safety.

This is a gas that contains charged particles. At cold temperatures, it can alter the surface of a cell.

A lab-based study shows the gas changes expression of receptors on the skin that would normally allow the virus to attach. This results in less SARS-CoV-2 attachment and infection. Scientists now think this technology could be adapted to a nasal spray to prevent SARS-CoV-2 infection.

How could we stop the virus replicating?

Another tactic is to develop nasal sprays that stop the virus replicating in the nose.

Researchers are designing genetic fragments that bind to the viral RNA. These fragments known as locked nucleic acid antisense oligonucleotides (or LNA ASOs for short) put a proverbial spanner in the works and stop the virus from replicating.

A spray of these genetic fragments delivered into the nose reduced virus replication in the nose and prevented disease in small animals.

How could we change the nose?

A third strategy is to change the nose environment to make it less hospitable for the virus.

That could be by using a nasal spray to change moisture levels (with saline), alter the pH (making the nose more acidic or alkaline), or adding a virus-killing agent (iodine). Saline can reduce the amount of SARS-CoV-2 in the nose by simply washing away the virus. One study has even found that saline nasal irrigation can lessen Covid disease severity. But we would need further research into saline sprays.

An Australian-led study has found that an iodine-based nasal spray reduced the viral load in the nose. Further clinical trials are planned.

One study used a test spray containing ingredients including eucalyptus and clove oils, potassium chloride and glycerol. The aim was to kill the virus and change the acidity of the nose to prevent the virus attaching.

This novel formulation has been tested in the lab and in a clinical trial showing it to be safe and to reduce infection rate from about 34 per cent to 13 per cent when compared to placebo controls.

Despite promising data so far on nasal sprays for Covid, one of the major barriers is keeping the sprays in the nose. To overcome this, most sprays need multiple applications a day, sometimes every few hours.

So based on what we know so far, nasal sprays will not singlehandedly beat Covid. But if they are shown to be safe and effective in clinical trials, and receive regulatory approval, they might be another tool to help prevent it.