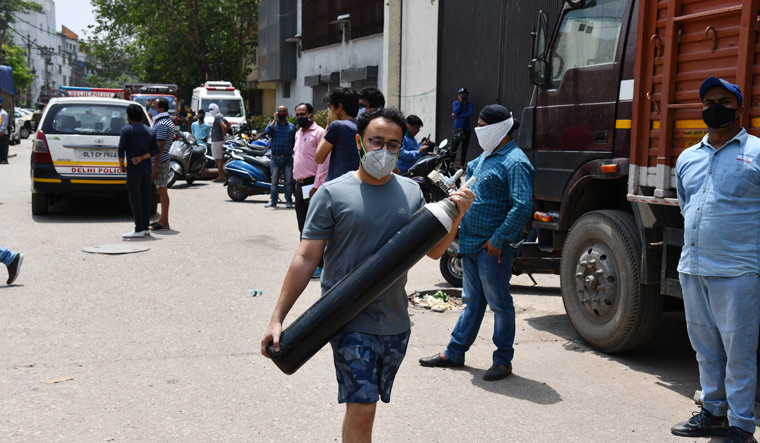 Gasping for air: A Delhi resident carries an oxygen cylinder for refilling at Naraina Industrial Area in April. The Delhi High Court had pulled up the Centre over the oxygen crisis in the capital | Sanjay Ahlawat

As the second wave of the Covid-19 pandemic struck, India became the focus of the world as the epicentre of the dreaded disease. At the peak of the second wave in July 2021, India, was recording daily average deaths of 35,000 people. In fact, as of the end of July 2021, deaths recorded between May and July 2021 accounted for 56 per cent of the total death toll of the country at the time. This was largely due to India’s unpreparedness to tackle the pandemic of that magnitude and the inadequacy of medical oxygen for thousands battling for breath.

The response of the government came in many forms with a single mission to ensure oxygen was available wherever it was needed. The demand for medical oxygen had soared 10-fold and authorities raced against time. Additional tankers were airlifted from other countries into India, tankers previously used for liquid nitrogen and argon were converted for oxygen transport, railways were equipped to move specialised oxygen express trains, while an online tracking system was introduced to monitor the movement of the lifesaving commodity in at least 550 geo-mapped cities and districts in real-time.

Prior to this, only a handful of hospitals had the capacity to install in-house facilities that could produce oxygen. With the government's intervention and the resolve of practitioners, thousands of pressure swing absorption (PSA) plants were established across the country, rising to more than 4,000 by April 2022. Industrial oxygen produced in steel plants was diverted to hospitals, while newer innovations were introduced in the frantic effort to make the precious gas available. But, with normalcy returning and demand for medical oxygen dropping significantly, there are lessons for India with regards to staying prepared for any such emergency in the future.

If there is one thing the pandemic emphasized, it is the fact that the government cannot do it alone. As of October 2021, the Indian government had funded the establishment of 1,224 PSA plants under the PM Cares programme, with a production capacity of 1,750 metric tonnes daily. While this is a commendable feat, the support of the private sector and development partners became crucial to enhancing production even further. Moving forward, it is important to leverage such partnerships in ensuring that more plants are established along with storage and transport facilities for moving necessary oxygen to the hinterlands in the present and the future.

Acknowledging that some hospitals lack the financial capacity to set up plants, the government can provide special seed funding or incentives for them to set up their own plants. On the other hand, central plants can be built by the government in specific locations to serve a number of hospitals and health centres who can jointly maintain the facility. The policy of the Bihar state government can be adopted by other states and even the central government, offering a capital subsidy of 30 per cent or even more for the establishment of oxygen plants and facilities.

Ramping up maintenance and technical capacity

At the moment, India does not need as much medical oxygen as it is able to produce, but it is necessary to stay prepared for the future. Available oxygen plants should be maintained to keep them going. Thankfully, there's a five-year maintenance contract included in the 1,224 PSA plants established through the PM Cares fund. This will ensure proper maintenance and sustainability. However, there's a need to further expand the annual maintenance contract in a bid to accommodate the remaining 2,500+ plants scattered across the country.

Furthermore, cryogenic tankers and cylinders must be made available and maintained by putting them to innovative uses, including storage and delivery of liquid medical oxygen (LMO) to hard-to-reach places. Another major problem faced during the pandemic was the inadequacy of trained personnel who could operate PSA plants, oxygen concentrators, and even ventilators. To stay ahead of a future pandemic, India must begin a comprehensive programme that ensures the continuous training of medical practitioners and technicians in handling and operating these oxygen machines.

Towards a comprehensive medical oxygen ecosystem

India can become a model for the rest of the world if proper initiatives are implemented. Many experts still argue that the oxygen crisis faced during the pandemic was not so much from the lack of the gas, but its concentration in the cities and industrial hubs. Although trucks and aeroplanes were effectively deployed, these channels are expensive with several disadvantages. The way forward would be the creation of buffer storages at strategic locations for improved proximity to different parts of the country. There is also a need to explore other multimodal transport systems like pipelines for effective and faster delivery when the need arises.

Sharma is the co-founder of Absstem Technologies.