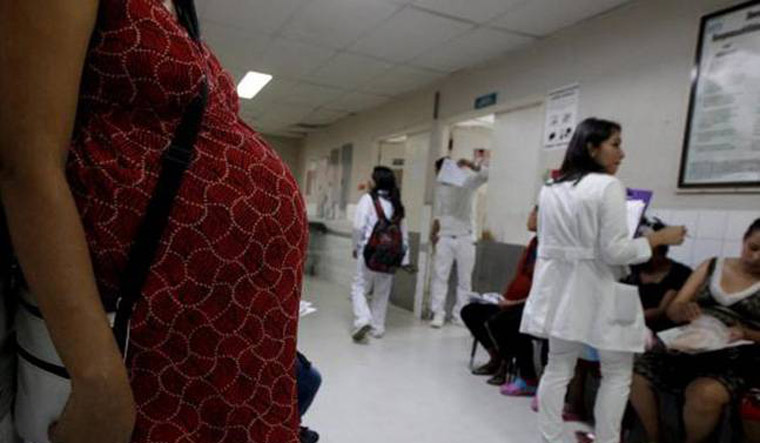 The Sassoon General Hospital in Pune has claimed to have reported the country's first case of 'vertical transmission' of the coronavirus infection from a mother to her child through the placenta.

Explaining the phenomena, Sassoon General Hospital's paediatrics department head Dr Aarti Kinikar told PTI on Tuesday that when a person contracts the infection, it is mainly because of some contact with fomites. If the mother is infected, the baby can be infected post-natally because of breastfeeding or any other contacts. So, in layman's language, the baby does not have an infection at birth, but acquires it after three to four days, she said.

"Whereas vertical transmission means when the baby is in the uterus itself and the mother has an infection, (she may be) either symptomatic or asymptomatic, and she can transfer the infection through the placenta to the baby," she said.

Dr Kinikar said in the present case, which was quite challenging for them, the woman had symptoms for a week before her delivery.

"Since the Indian Council of Medical Research (ICMR) has made it mandatory to test all pregnant women, the woman here was tested but her reports were negative," she said.

After the baby girl's birth, swabs of the child's nose, the umbilical cord and placenta were tested and the reports came out positive, she said.

"The baby was then kept in a separate ward. After two to three days of birth, the baby also developed strong symptoms like fever and there were signs of cytokine storm, suggesting severe inflammation," said Dr Kinikar.

A cytokine storm is a physiological reaction in which the immune system causes an uncontrolled and excessive release of pro-inflammatory signalling molecules called cytokines.

Dr Kinikar said the baby girl was kept in intensive care and after two weeks, she settled down and recovered. Both the mother and the child have been discharged.

"During the investigation, it was confirmed that it was a vertical transmission. We waited for three weeks and tested the blood samples of both the mother and child for antibody response," Dr Kinikar said.

Both had developed antibodies, she said, adding that while the antibodies were high in the mother, the baby had less.

Dr Kinikar said this was a very challenging case for them. "The baby developed a severe coronavirus infection and it required a lot of attention and efforts to successfully treat the baby."

She said they are in the process of documenting the case in a reputed international journal.

Sassoon General Hospital's Dean Dr Murlidhar Tambe claimed this is the first case of vertical transmission of coronavirus infection in India. "I congratulate the doctors who worked hard to treat the mother and the baby," he said.

The baby was born at the hospital in the last week of May. Both the child and her mother were discharged three weeks later, another hospital official said.