The latest advisory on hydroxychloroquine was issued on May 21 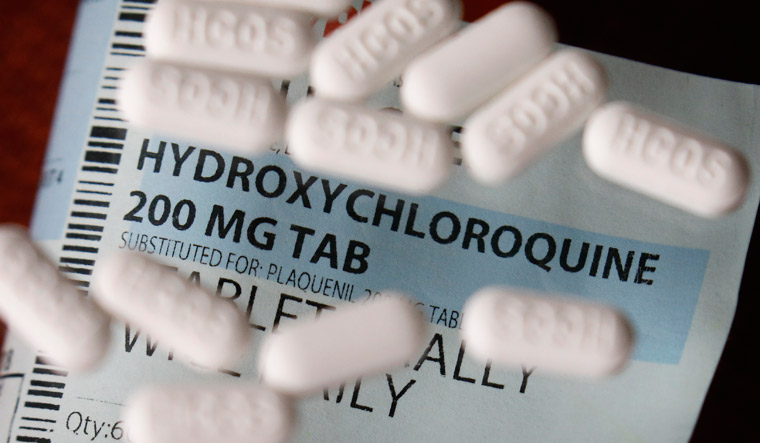 In its revised advisory on hydroxychloroquine, the Centre has expanded the pool of those advised to take the drug for preventing COVID-19. Three new categories—all asymptomatic healthcare workers working in non-COVID hospitals or areas of COVID hospitals or blocks, asymptomatic frontline workers such as surveillance workers deployed in containment zones and paramilitary or police personnel involved in COVID-19 related activities—have now been included in the latest advisory that was issued on May 21.

According to the advisory, the National Task Force constituted by the Indian Council of Medical Research (ICMR) has reviewed the data on the “in-vitro testing of HCQ for antiviral efficacy against SARS-CoV-2”, “safety profile of HCQ reported to the pharmacovigilance program of India”, and “data on the use of HCQ for the prophylaxis [prevention] of SARS-CoV-2 infection among health care workers (HCWs)”.

“At NIV, Pune, the report of the in-vitro testing of HCQ for antiviral efficacy showed reduction of infectivity/log reduction in viral RNA copy of SARs-CoV2,” the advisory says.

Under the safety profile of HCQ, the data on assessment of HCQ prophylaxis (prevention) among 1323 HCWs indicated mild adverse effects such as nausea (8.9%), abdominal pain (7.3%), vomiting (1.5%), hypoglycemia (1.7%) and cardio-vascular effects (1.9%), the advisory says. “However, as per data from the pharmacovigilance program of India, there have been 214 reported instances of adverse drug reactions associated with prophylactic HCQ use. Of these, seven were serious individual cases, safety reports with prolongation of QT interval (heart muscle takes longer than normal to recharge between beats) on ECG in three cases,” the advisory states.

More importantly, the advisory cites the three studies on prophylaxis of COVID-19 infection in India that form the basis of the expansion of the pool of people who will be taking the drug. First is a retrospective case-control analysis at ICMR, that has found that there is a “significant dose-response” relationship between the number of prophylactic doses taken and frequency of occurrence of SARS-CoV-2 infection in symptomatic healthcare workers who were tested.

Another investigation from three central government hospitals in New Delhi indicates that amongst healthcare workers involved in COVID-19 care, those on HCQ were “less likely” to develop SARS-CoV-2 infection, compared to those who were not on it. “The benefit was less pronounced in healthcare workers caring for a general patient population,” the advisory states. Third, an observational prospective study of 334 healthcare workers at AIIMS, out of which 248 took HCQ prophylaxis (median 6 weeks of follow up) in New Delhi also showed that those taking HCQ prophylaxis had lower incidence of SARS-CoV-2 infection than those not taking it, according to the advisory.

Though the Centre has relied on a case control and observational studies, when it comes to assessing the safety and efficacy of a drug, experts say that randomised control trials are “gold standard”. Observational studies can be descriptive or analytical; case-control studies fall under the ambit of the analytical, and involve recruiting case and controls [group that doesn’t get the drug], said an epidemiologist with the ICMR, who did not wish to be identified because of protocol issues. The epidemiologist is not part of the task force that was involved in taking the decision.

“Observational studies can bring in biases of several types, such as selecting cases and confounding at design or conduct stages of the study,” said the epidemiologist. In epidemiology, confounding involves the possibility that an observed association is due—totally, or in part—to the effects of differences between the study groups (other than the exposure under investigation) that could affect their risk of developing the outcome being studied.

“To avoid or minimise or control such biases, we use methods of randomisation and binding and do studies in a controlled fashion. These are called randomised controlled trials,” the epidemiologist explained. Any recommendation on the basis of evidence from observational studies has to weigh the risk versus the benefit at an individual versus population level, and availability of any measures to treat or manage a newly emerging problem,” he said.

Dr Anant Bhan, Bhopal-based researcher in bioethics and global health said that the issue with the Centre’s advisory was that the data on each of these studies was not yet in the public domain, and hence, there was no way of analysing the design, sample size estimations, results and the biases that might have crept in.

“All we have at this point is a set of claims by the government. We also don’t know whether these studies are still underway, or completed,” Bhan told THE WEEK. According to Bhan, the centre’s first advisory on HCQ itself was based on “poor science”. After first recommending it as a life-saving preventive measure for certain high risk populations, having a control group in a study in these populations—the group that doesn’t get the drug, to compare outcomes—would anyway have been unethical.

However, now that the advisory had been expanded, while global evidence has been mounting on the fact that the drug lacks efficacy and could have side effects, the Centre ought not to administer the drug to anyone as a preventive measure, and withdraw its recommendation.

“A pandemic cannot be an excuse for poor quality of evidence,” Bhan said. “A smaller pilot RCT could have been done if a bigger one was not possible,” he said. “That way, whatever early data was gathered and analysed, could have been used to guide a decision about a larger study and to guide policy.”

On May 22, the Lancet published a large observational study that was “unable to confirm a benefit” of hydroxychloroquine or chloroquine when used alone or with a macrolide (antibiotic). It also concluded that each of these drug regimens was associated with decreased in-hospital survival, and an increased frequency of ventricular arrhythmias when used for treatment of COVID-19.

Dr Mike Ryan, executive director, WHO Health Emergencies Programme, too, clarified this week that as of now, there is no evidence from randomised controlled trials for the effectiveness of hydroxychloroquine or chloroquine in the treatment or prevention of COVID-19.

It’s not that observational studies such as the one done by the Centre don’t have their utility, experts say. “Observational studies give us some ideas, clues and help us in formulating hypothesis,” the epidemiologist said. But “best” evidence can only be generated through an RCT or systematic review of RCTs.

“I see no data to support the use of HCQ as a preventive measure. And the Lancet study shows it would do harm. In my view, the drug’s use should not be supported as a prophylactic or in treatment,” said Dr Anoop Misra, chairman of Fortis Centre for Diabetes, Obesity and Cholesterol (C-DOC) and heads, National Diabetes Obesity and Cholesterol Foundation (NDOC).

In March, Misra co-authored an article “Chloroquine or Hydroxychloroquine in the treatment of COVID-19 with or without Diabetes: A systematic search and a narrative review with a special reference to India and other developing countries”. Back then, Misra had advocated “conditional approval” for the drug, until good data is available.

“While data for HCQ in Covid-19 across the world consistently finds no benefit and rather a suggestion of harm, how can Indian health authorities widen the indication for HCQ prophylaxis based on just a tiny evidence [sic] without publishing it in any impactful peer reviewed journal?” Dr Awadesh Kumar Singh, senior consultant endocrinologist, G. D Hospital & Diabetes Institute, Kolkata, and also co-author of the HCQ article with Misra, tweeted on Saturday.

The health ministry’s advisory on HCQ said that the drug shouldn’t instil a sense of “false security” among those taking it. The drug should be taken under medical supervision. “Rarely the drug causes cardiovascular side effects such as cardiomyopathy and rhythm (heart rate) disorders. In that situation the drug needs to be discontinued,” the advisory said. “The drug can rarely cause visual disturbance including blurring of vision which is usually self- limiting and improves on discontinuation of the drug. For the above cited reasons, the drug has to be given under strict medical supervision with an informed consent,” the advisory said. An ECG (with estimation of QT interval) may be done before prescribing HCQ prophylaxis and should also be done in case any new cardiovascular symptoms occurs (e.g., palpitations, chest pain syncope) during the course of prophylaxis.