All about Cuba’s ‘wonder drug’ being pitched against coronavirus

The anti-viral drug was used for treatment in China 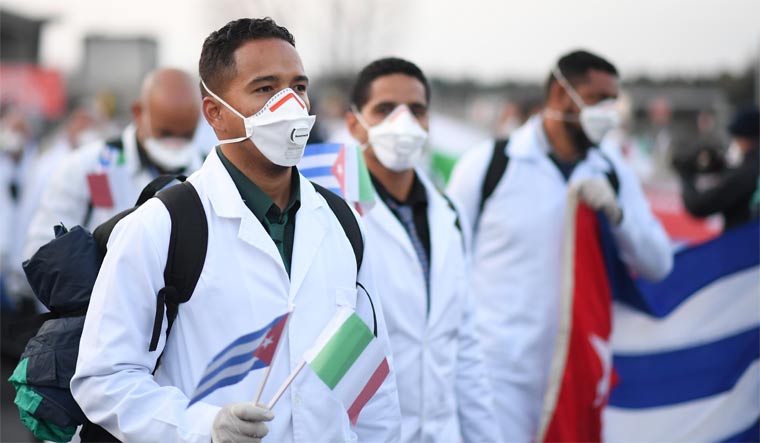 As the world battles the coronavirus outbreak, with the global death toll crossing 16,000, scientists are in a race to find the best cure. China, where COVID-19 emerged in late December last year, had shortlisted 30 drugs to fight the virus.

One of these medicines picked by the Chinese National Heath Commission has been creating news, with many calling it a wonder drug. The anti-viral drug called Interferon Alfa-2B is produced in China, by a Cuban-Chinese joint venture ChangHeber. Considered one of the stars of the Cuban biotechnology boom, the drug has reportedly been effective in the treatment of HIV, human papilloma virus, Hepatitis B and C.

According to reports, this Cuban drug has proven effective in treatment of viruses that show characteristics similar to the novel coronavirus. While Ireland is considering bringing in Cuban drugs to combat COVID-19, Cuba has already sent its emergency contingent of doctors and nurses to fight the novel coronavirus in Italy.

The effectiveness of the interferon treatment on COVID-19 is yet to be scientifically proven.

Interferons are proteins that are part of our body’s natural defence systems, and draw their name from the word ‘interfere’’ because they interfere with viruses and prevent them from multiplying. According to WebMD, there are three types of interferons. Cells that have been infected with viruses or other germs give off interferon-alpha and interferon-beta as a warning signal to your immune system. That triggers immune cells called white blood cells to release interferon-gamma to fight the germs.

Interferon drugs are man-made versions of the proteins that the human body creates. The drugs equip the body to tackle viruses, preventing them from multiplying in the body. Interferon drugs first emerged for cancer therapy. Interferons have also been used in the treatment of HIV and AIDS.

Cuba manufactured its first interferon in 1981 and was used in the treatment of the haemorrhagic dengue epidemic in Cuba the same year. The country later manufactured ‘recombinant’ human interferon Alfa-2B in 1986.

Three months into the pandemic, it is still unclear which drug can successfully combat the disease. While studies are on, and different countries try various combinations to treat its patients, the WHO recently launched a multicountry clinical trial to test four drug combinations that have yielded results - n experimental antiviral drug called remdesivir, the antimalarial drug chloroquine (or the related hydroxychloroquine), a combination of two HIV drugs, and those same two HIV drugs along with the anti-inflammatory interferon beta.