Since 2017, coronary stents in the country fall within the ambit of price capping 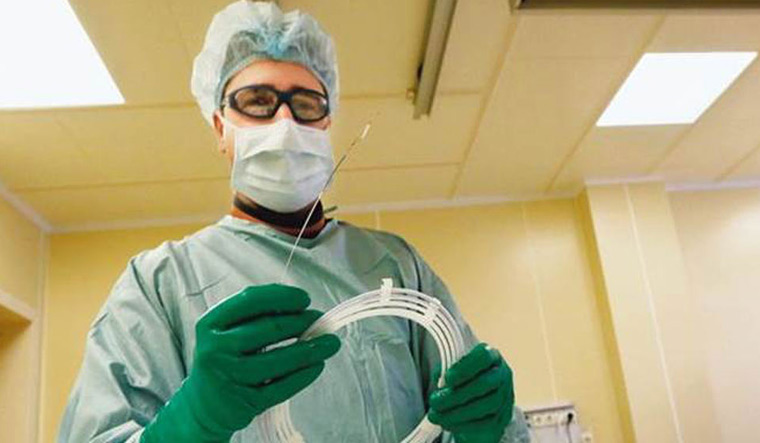 Three years after the Centre had put coronary stents under price caps, the national pharmaceutical pricing authority, on Friday, gave a rare exemption to a made-in-India stent. MeRes100, the bioresorable vascular scaffold stent, manufactured by Vapi-based medical technology company Meril Life Sciences is the first made-in-India stent of its kind. The stent had been approved by the Central Drugs Standard Control Organisation in 2017, and had been awaiting government approval for a price cap exemption.

"Meril Life Sciences’ application to the NPPA for non-applicability of all provisions of DPCO 2013 for a period of five years from the start of commercial production, under para 32(ii) of Drug Price Control Order, 2013, has been granted for their innovative product ‘MeRes100 BRS - Sirolimus Eluting Bio-Resorbable Vascular Scaffold System," a company spokesperson said.

Since 2017, coronary stents in the country fall within the ambit of price capping— bare metal stents are priced at Rs 8,261, and the price of a drug-eluting stents [DES] is capped at Rs 30,080.

In the case of MeRes100, however, Meril Life Sciences, a global medical technology company, had asked to be exempt from price capping. This exemption is offered to companies adhering to certain key criteria: new and innovative drug development, indigenously researched and manufactured, as well as patented under the Indian Patent Act, 1970, a company spokesperson had told THE WEEK on an earlier occasion. "Since its innovative product MeRes100TM BRS - Sirolimus Eluting Bioabsorbable Vascular Scaffold System fulfils these criteria, Meril Life Sciences applied to NPPA for non-applicability of DPCO 2013 on May 28, 2018, and the exemption will be granted as recommended by the NPPA Authority minutes dated February 25, 2020," the spokesperson said.

Bioresorbable scaffolds (BRS) were designed to overcome the limitations of metallic stents. However, globally, there have been concerns about their long-term safety. “We do not know the basis for the experts to be satisfied by the (safety & efficacy) data of the stent. It has been our concern that the only data submitted by Meril are limited to a small, non-randomised, single-arm trial which was inadequate to prove safety," said Malini Aisola, convenor, All India Drig Action Network. "While close monitoring has been recommended, we are concerned that no specific plan has been drawn up for post-marketing evaluation of safety and efficacy, against the current standard of care - a DES stent, as far as we are aware," said Aisola.

AIDAN has also challenged the exemption provisions of the DPCO, 2013 in the Delhi High Court. "Through the petition, we have pointed out the severe legal defects of para 32 that creates an automatic and complete exemption from all the provisions of the DPCO and therefore results in a complete bar over the GOvernment's ability to exercise any form of price control,” said Aisola.

Though the study reported favourable results, in their submission, AIDAN has pointed to the limitations acknowledged in the published study itself which state: “The results of our study are based on the first-inhuman study in a relatively small number of stable patients with non-complex coronary lesions. Also, the results cannot be generalised to more complex lesions or higher-risk patients. The low MACE (major adverse cardiac event) rate needs a cautious interpretation given the single-arm trial design without any active comparator. Any inference of non-inferior or superior safety against current-generation drug-eluting stents or scaffolds is not possible.”

A spokesperson from Meril added that the given the innovative nature of the new technology, the company had decided to go beyond the regulatory requirement of one-year follow-up data to produce longer-term data on the safety of MeRes100 BRS. "Now, with even three-year follow-ups confirming the initial findings of zero stent thrombosis and extremely low MACE, Meril Life Sciences is ready to launch this technology shortly," the spokesperson said. In parallel to commercial launch, the company would also be establishing a 1000 patient registry in India and 1000 patient registry globally. "This will enable acute and long-term surveillance, safety and efficacy assessments and assessment of performance in a real-world clinical setting," Meril said in a statement.

The company would also be conducting randomised long-term clinical trials in India and globally across US, China and other sites to further establish the efficacy and safety of BRS. This will include a 2,000 patient randomised controlled trial comparing BRS to best in class metallic DES technology, they said.