Antimicrobial resistance is one of the most life-threatening health emergencies 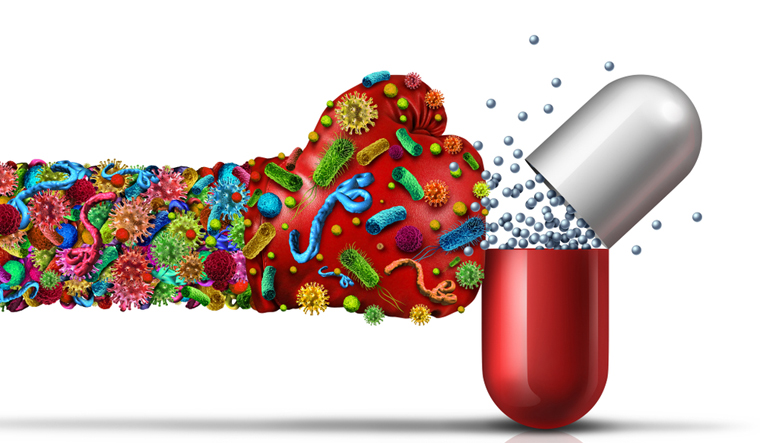 Discovery of penicillin in 1928 by Alexander Fleming opened new frontiers in healthcare revolution. Since its discovery, it is estimated that penicillin alone has saved around 200 million lives and over these years, more than 100 new antibiotics have been discovered as a result of which mortality due to infections has seen a steady decline.

In 1945, while collecting the Nobel Prize for his groundbreaking work, Fleming shared his vision as a cautionary tale and warned that misuse of the drug could result in selection for resistant bacteria. Little did we realize that true to his prediction, today antimicrobial resistance (AMR) would become one of the most life-threatening health emergencies in the world. It is estimated that as of 2014, 700,000 people died due to AMR annually. A UK government review estimated that by 2050, AMR could be causing 10 million deaths a year. Back home in India, according to a 2019 estimate, about 2 million people may die of antimicrobial resistance by 2050.

Over the years, India’s healthcare burden from non-communicable diseases (NCD) has increased consistently. As per the National Health Profile 2019, over 65 million patients were screened at NCD clinics from January 1 to December 31, 2018. Cases of common cancer diagnosed at these clinics increased by nearly 324% between 2017 and 2018. Several NCDs, such as cancer and diabetes, are accompanied by increased susceptibility to infections, which are treated with antibiotics. This coupled with the mounting burden of surgeries and infectious diseases, only add to the increasing need for antibiotics. In the face of growing ineffectiveness of existing antibiotics, and absence of new discoveries of superior next generation antibiotics, it is a no-brainer that the world is heading to a public health crisis and India will face catastrophic consequences.

The most common factors which lead to AMR include misuse and overuse of antibiotics through self-medication and indiscriminate access to antibiotics without prescription. The practice of adding antibiotics to agricultural feed also promotes drug resistance; take the example of United States, where more than half of the antibiotics used are for agricultural purposes. Besides these, use in livestock and poultry is another important cause which adds to the problem of AMR.

Another crucial but less talked about contributor to the AMR burden is effluent discharge from pharmaceuticals manufacturing units. The situation for countries like India and China become grim because they are not only one of the largest consumers of antibiotics worldwide but also one of the largest producers of antibiotics in the world (India and China manufacture 80% to 90% of world’s antibiotics) which makes us even more vulnerable to AMR. Based on global research and evidences from China and India, for years, there have been call to action for the introduction of effective legislation on this issue including incorporation of environmental criteria to Good Manufacturing Practices (GMP).

In China, in recent years, antibiotic pollution started to get reported at multiple sites where drug resistance was becoming a real and growing threat. As part of its National Action Plan on AMR (NAP-AMR) released in 2016, one of the many interventions proposed also included strengthening the prevention and governance of environmental pollution of antibiotics and accelerating the establishment of systems to monitor and evaluate antibiotic contamination. To this effect, in 2018, China shut down hundreds of Active Pharmaceutical Ingredients (API) manufacturing units across the country which were found to be causing damage through effluent discharge.

In an Indian context, to tackle the problem holistically with a ‘one-health’ approach, a similar NAP-AMR was launched in April 2017, urging stakeholders from the ministries of health, environment, water, agriculture and science and technology to work together on AMR. Since its launch, progress has been made on several fronts, be it Food Safety and Standards Authority of India (FSSAI) issuing regulations on permissible levels of antibiotic residue in meat and meat products, effectively restricting irrational use of these drugs in livestock or encouraging responsible use of antibiotics in humans by mandating changes in packaging of antibiotics with a red line.

However, India’s commitment and seriousness to tackle AMR is highlighted by the most recent endeavor of the Union Ministry of Environment, Forest and Climate Change (MoEF&CC). Earlier this month, after consultation with multiple stakeholders, MoEF&CC has proposed draft standards for antibiotic residues in the treated effluents of the pharmaceutical industry. Should this be notified, India will become the first country in the world to have legally enforceable discharge limits for antibiotics in waste from the pharmaceutical industry putting us ahead of China and all other developed countries in leading the discourse on AMR.

So why is this forward-thinking step taken by the Indian Government commendable? Unlike technology and gadgets, which have newer and upgraded versions ready in line for launch before the previous one wears out, new discoveries in antibiotics and drugs in general are expensive and take hundreds, at times thousands of millions of dollars. If the current generation of antibiotic outlives its utility before the next generation is ready for commercial launch, not only does it create a perilous public health emergency, but also threatens to wipe out the entire business of antibiotic companies across the world. Both of which, this world cannot afford.

As a global leader in antibiotic manufacturing, India undoubtedly has immense potential to further strengthen its footprint, however, with great power of being able to save millions of lives with antibiotics, comes great responsibility. With this regulatory change, India will be better equipped to shoulder the responsibility to avert an antibiotic apocalypse and ensure sustainability for both the environment and the industry.