Deep sleep can calm and reset the anxious brain 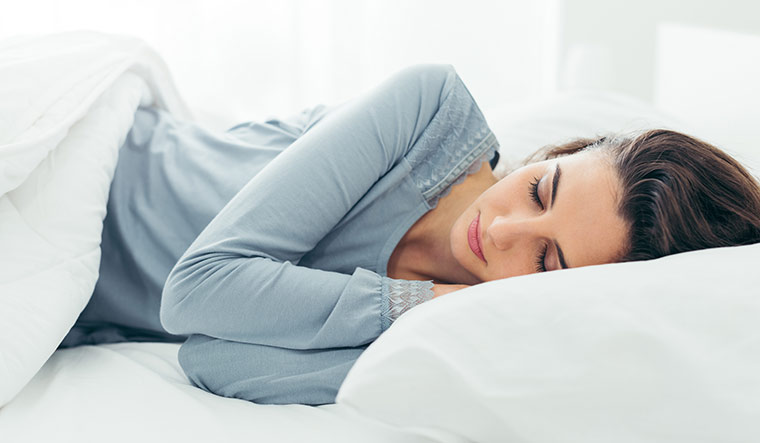 Recent research has established that deep sleep as a non-pharmaceutical remedy for anxiety disorders. The findings of the study revealed a new function of deep sleep in which anxiety is decreased overnight by reorganizing nerve connections in the brain.

People suffering from the mental health disorder are bombarded by feelings of worry, anxiety, or fear that are so strong that they interfere with their daily activities, the study, published in the journal Nature Human Behavior, noted.

The researchers, including those from the University of California (UC) Berkeley in the US, found that deep sleep—also known as non-rapid eye movement (NREM) slow-wave sleep—can calm and reset the anxious brain.

In this sleep state, oscillations in the electrical activity in the brain's neurons become highly synchronized, and the heart rate and blood pressure drops, the researchers said.

A sleepless night can trigger anxiety by up to 30 per cent while a full night's nap can stabilise emotions.

According to the researchers, the study provides one of the strongest links to date between the brain circuits involved in sleep and anxiety.

As part of the study, the researchers scanned the brains of 18 young adults using functional MRI, polysomnography and other measures as they viewed emotionally stirring video clips after a full night of sleep, and again after a sleepless night.

They measured the anxiety levels of the participants following each session via a questionnaire known as the state-trait anxiety inventory.

When the participants did not get any sleep, their scans showed a shutdown of a brain region called the medial prefrontal cortex, which normally helps keep our anxiety in check, while the brain's deeper emotional centers were overactive, the researchers said.

"Without sleep, it's almost as if the brain is too heavy on the emotional accelerator pedal, without enough brake," Walker said.

The results revealed that the participants who had a full night of sleep had significantly reduced anxiety levels, especially for those who experienced more slow-wave NREM sleep.

"Deep sleep had restored the brain's prefrontal mechanism that regulates our emotions, lowering emotional and physiological reactivity and preventing the escalation of anxiety," Simon said.

The researchers replicated the results in a study of another 30 participants, showing that those who got more nighttime deep sleep experienced the lowest levels of anxiety the next day.

Simon and his team also conducted an online study tracking how the sleep and anxiety levels changed for four consecutive days in 280 people of different ages.

The results revealed that the amount and quality of sleep from one night to the next predicted the anxiety levels they would feel the next day.

The researchers said that even subtle nightly changes in sleep affected the participants' anxiety levels.

The study, the researchers said, not only establishes a causal connection between sleep and anxiety, but also identifies the kind of deep sleep needed to calm an overanxious brain.