Thyroid disorders on the rise in India

There is significant regional variation in prevalence 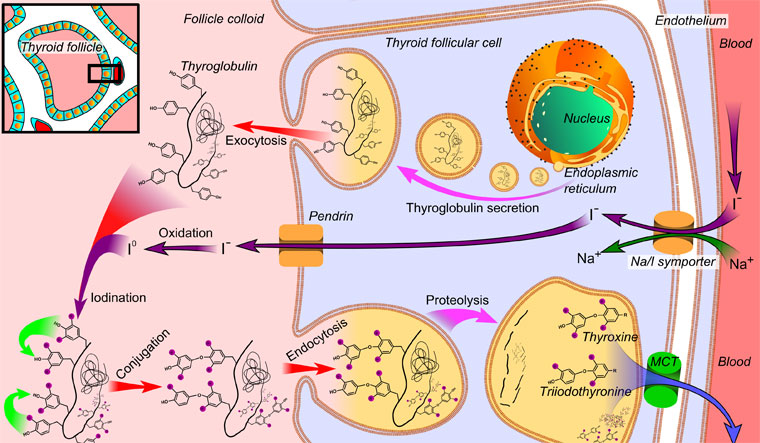 According to statistics, thyroid disorders are on the rise in India. Approximately 1 in 10 Indian adults suffer from hypothyroidism, a condition in which the thyroid gland does not produce enough thyroid hormones to meet the needs of the body. This condition is twice as prevalent in women as in men and is common among women of child-bearing age. A 2016 study conducted in nine Indian states, assessing prevalence of hypothyroidism in pregnancy with TSH found 13.13 per cent of pregnant women to be hypothyroid. Following trimester-specific Thyroid Stimulating Hormone (TSH) cutoffs of 2.5 mIU/L for the first trimester and 3.0 mIU/L for the second and third trimester, as recommended by the FOGSI, ITS & NRHM guidelines, prevalence of hypothyroidism was found to be 44.3 per cent, 32.0 per cent, and 34 per cent in the first, second, and third trimester respectively. There is significant regional variation in prevalence. In Maharashtra, the study showed 17.85 per cent prevalence in Pune and 14 per cent in Nasik. “Thyroid prevalence is on the rise as we have seen a surge in cases," says Shashank Joshi, Secretary, Indian Thyroid Society (ITS). He says the two main reasons that contribute to the rise in the cases thyroid disorders are rising awareness of the disease , which means more patients with this condition are being diagnosed, and autoimmunity, which is the most common cause of thyroid and is often triggered by stress.

Thyroid tends to impact women between the ages of 18-35, which is the most productive period of their life, as well as the prime reproductive period, because that is also the time they tend to suffer the most stress, adds Joshi. Abnormal levels of thyroid hormones during pregnancy are associated with an increased risk of complications such as anemia, miscarriages, postpartum bleeding, preeclampsia and placental abruption. The thyroid hormone is critical for normal development of the fetal brain and nervous system and during the first trimester, the fetus depends on the mother’s supply of thyroid hormone, which directly comes through the placenta. Therefore, treating thyroid disorders is important for both maternal and child health, as thyroid disorders significantly increase the risk of adverse birth outcomes such as preterm birth, low birth weight and fetal death.

Despite a high number of pregnant women suffering from the condition, the low penetration of screening and testing for the disorder remains a concern, says Nandita Palshetkar, president of Federation of Obstetric and Gynecological Societies of India (FOGSI). “Since thyroid disorders present non-specific symptoms such as fatigue, weight gain, constipation etc., they are often difficult to diagnose without testing. In the absence of visible signs and symptoms of thyroid disorders, combined with low patient awareness, thyroid testing tends to be overlooked.”

Detection in the first trimester is particularly important. In a conference organised by ITS, FOGSI and Abbot, guidelines recommend that testing should be conducted at the first prenatal visit or at the time of confirmation of pregnancy, and that diagnosis should be based on trimester-specific TSH thresholds. “Late detection not only increases the chance that surgical intervention is required, but it also leads to higher risk of irreversible damage caused by complications," explains Joshi. Based on trimester-specific cutoffs, the prevalence of hypothyroidism can be as high as 44 per cent in the first trimester which is a critical period, as early detection helps reduce risks to both the mother and the fetus, says Palshetkar. The Indian Thyroid Society has launched a campaign, 'MITA - Making India Thyroid Aware,' in partnership with Abbott India, to drive awareness amongst doctors and patients for early diagnosis and treatment of thyroid disorders amongst women in the age group of 25 to 45 years. In the coming year, Abbott, ITS and FOGSI plan to educate 20,000 physicians and gynecologists, through digital, print and in-clinic initiatives.