"If I have hurt anybody with any actions of mine, I'm sad about it" 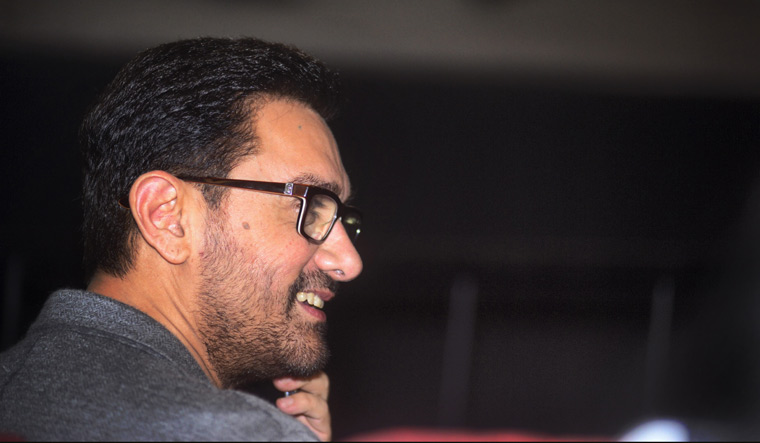 Aamir Khan during a press conference for the promotions of his upcoming movie 'Laal Singh Chaddha', in New Delhi, Aug. 9 | PTI

Superstar Aamir Khan on Tuesday said he is having sleepless nights ahead of the release of his much-anticipated film "Laal Singh Chaddha".

An official Hindi remake of the Tom Hanks-led 1994 Hollywood classic "Forrest Gump", the film is scheduled to be released theatrically worldwide on Thursday.

Khan, whose last big screen outing "Thugs of Hindostan" had a dull run at the box office in 2018, said his brain is in "overdrive" mode.

"I'm really nervous about the release. I have not slept for 48 hours... My brain is in overdrive. I play chess online, read books to keep myself busy. I guess I can only sleep after 11th August. I believe both Advait Chandan (director) and I will sleep like a log post the release of the film," the 57-year-old actor said at an event here celebrating 25 years of PVR Cinemas.

During the event, Khan reiterated his appeal to the audience to come to the theatres to watch the movie as it is a product of years of hardwork of a lot of people.

"If I have hurt anybody with any actions of mine, I'm sad about it. I don't want to hurt anyone. I think if some people don't want to watch my film, I will respect that.

"But I would like as many people as possible to watch the film. We have put in a lot of hardwork. Filmmaking is a team effort. It's not just me," the actor said in response to a question about boycott calls against the movie on social media.

Last week, hashtags calling for the boycott of "Laal Singh Chaddha" were trending on social media. Asked to comment on the trends, Aamir had said he was saddened by the boycott calls and urged the audience to not snub his film.

For Khan, nothing compares to the joy of watching a movie in a dark theatre with many people, he said.

"The collective joy of the audience can't be experienced at home. That's why I prefer watching films on the big screen," he added.

The actor also revealed that after the release of his films, he "quietly" visits theatres to see audience reaction.

"Post the release of my films, I go to theatres in the first week and see the audience reaction quietly from some corner. This way I get unfiltered responses from the audience...

"When I went to see 'Lagaan' screening, it was a moving experience for us as filmmakers that people were loving our work so much. As a creative person, this experience is priceless."

The actor praised the upcoming Aanand L Rai-directorial and said he is hopeful that both the movies will do well at the ticket window.

"'Raksha Bandhan' is also coming. I have seen the trailer and it is a beautiful story. I hope both the films do well," he said.

Commenting on the 25 year journey of PVR, Ajay Bijli, chairman and managing director, PVR Limited said, We take immense pride and feel extremely joyous on completing the 25 years milestone in India. The entertainment industry, the viewership patterns as well as the audience has evolved over the years and PVR has been able to live up to their expectations."

"As we continue to meaningfully engage consumers as well as introduce them to newer cinematic experiences, our focus will remain on bringing winning stories to the screen and adding joy and comfort to the life of our stakeholders," he added.

To celebrate its silver jubilee with the audience, PVR Cinemas will also be organising a short film contest, filmy wishes contest and #25yearsofPVR Instagram Filter Challenge.

The cinemagoers will also have a chance to own PVR's first NFT coins and iconic tickets.