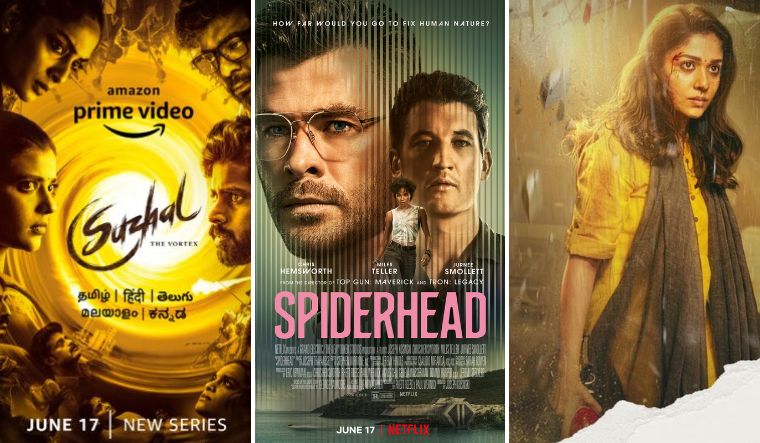 Another week of June is here, and we have some interesting releases to look forward to on OTT platforms. From Chris Hemsworth's thriller Spiderhead to Tamil series Suzhal: The Vortex and Nayanthara-starrer thriller O2, here is a quick look at what's arriving on streaming platforms this week.

The Netflix documentary is based on the life of pop star Jennifer Lopez. In the documentary, Lopez opens up about her relationships, career, the struggles of constantly being in the limelight and more.

An eagerly awaited show, Amazon Prime Video's first Tamil original series Suzhal: The Vortex revolves around the investigation of a missing girl that wreaks havoc in a small town in Tamil Nadu. But the series is not going to be available just in Tamil, but in more than 30 languages – both Indian and foreign. The series will be available. Hindi, Telugu, Malayalam, Kannada, English along with foreign languages like French, German, Italian, Japanese, Polish, Portuguese, Castilian Spanish, Latin Spanish, Arabic and Turkish, among others. It will also be available with subtitles in additional foreign languages. The show created by Pushkar and Gayatri features Kathir, Aishwarya Rajesh, Sriya Reddy and Radhakrishnan Parthiban in key roles.

Featuring Chris Hemsworth in the lead, Spiderhead revolves around two inmates in a state-of-the-art-prison who grapple with their lives and their pasts, while being subjected to emotions-controlling drug trials. The science-fiction prison thriller based on a George Saunders story is directed by Joseph Kosinski. “In a state-of-the-art penitentiary run by brilliant visionary Steve Abnesti (Chris Hemsworth), inmates wear a surgically attached device that administers dosages of mind-altering drugs in exchange for commuted sentences,” the film's synopsis reads.

Nayanthara is back with another thriller in GS Viknesh's O2. The actress plays the role of a mother in this survival drama. The film will release on Disney+Hotstar in Kannada, Malayalam, Tamil and Telugu. Going by the trailer, Nayanthara seems to be a sibgle mother of a child who suffers from a medical condition that does not allow him to breath without a breathing aid. A bus they are travelling in falls into a massive hole, leaving survivors struggling for air and fighting over her son's oxygen tank.

The second season of the Imtiaz Ali-created crime drama She will see Bhumika, played by Aaditi Pohankar, a timid Mumbai constable, in a “dynamic new avatar'. Kishore Kumar G and Vishwas Kini also reprise their roles as drug kingpin Nayak and Bhumi's senior Fernandez, respectively. Imtiaz Ali said the second season of She remains a deeply personal story even as it catapults to a higher octane drama.