Many big budget films have been put on hold again 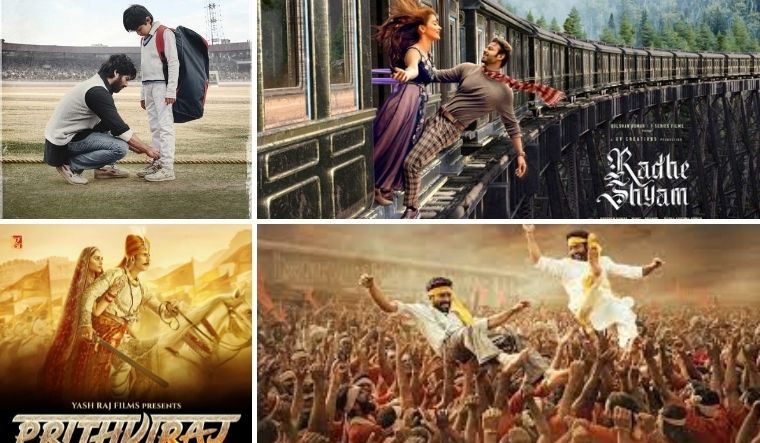 COVID-19 cases are spiking in major cities across the country, and states have started imposing restrictions again. Amid this, release of some highly-anticipated films have been postponed further.

Here is a list of films that have been postponed as cases rise:

1.      RRR: Rajamouli’s period action drama was set to release in theatres on January 7. But to the disappointment of fans, the team which was actively promoting the film, decided to the postpone the release due to the COVID-19 situation. The Telugu-language film is headlined by Ram Charan and N.T. Rama Rao Jr. The film is a fictional tale based on the lives of two freedom fighters in the early 20th century -- Alluri Sitarama Raju and Kumram Bheem

Bollywood stars Ajay Devgn and Alia Bhatt will be seen playing pivotal roles in the movie.

2.    Jersey: The Shahid Kapoor-starrer sports drama was set to release on December 31. It is the Hindi remake of 2019 Telugu blockbuster of the same name. Jersey chronicles the story of a talented but failed cricketer, who decides to return to the field in his late 30s driven by the desire to represent the Indian cricket team and fulfil his son's wish for a jersey as a gift. The film also stars Mrunal Thakur and Pankaj Kapur.

3.    Prithviraj: The makers of the period drama which was supposed to hit theatres on January 21 recently announced it was being postponed. In the film, Akshay Kumar essays the titular role of Prithviraj Chauhan, who fought "valiantly against the merciless invader Muhammad of Ghor", the production house had said in a statement earlier. The film also stars Sanjay Dutt, Sonu Sood and marks the screen debut of Miss World 2017 Manushi Chhillar.

4.     Radhe Shyam: Prabhas’s much-awaited romantic drama, scheduled for release on January 14, has also been postponed as COVID-19 cases rise. The official Twitter account of UV Creations, which has backed Radhe Shyam, made the announcement of the film's postponement: "We have been trying our best for the past few days but considering the growing cases of Omicron variant it looks like we will have to wait for our labour of love to get to the big screens.” Set in the 1970s, Radhe Shyam features Prabhas as Vikramaditya, who falls in love with Prerana, played by Pooja Hegde.