Crazy that someone else will tell you if you are woman enough or not: Taapsee on 'Rashmi Rocket' 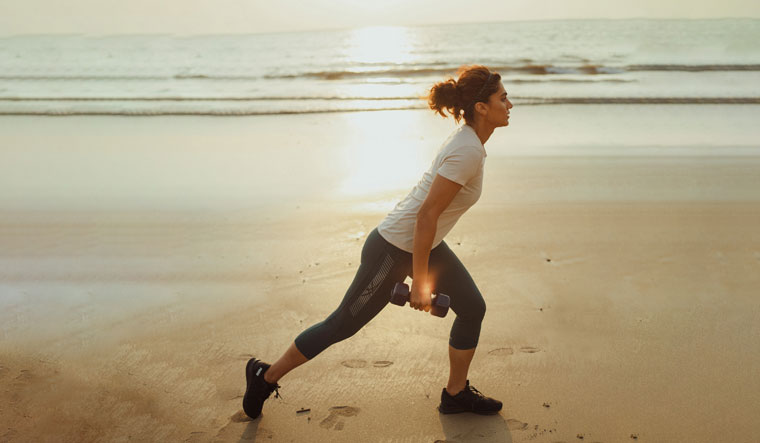 Weight and watch: Taapsee Pannu worked out hard to look the part of an athlete in her upcoming film Rashmi Rocket | Tejinder Singh Khamkha

Taapsee Pannu was surprised to learn about the gender test of female athletes and the actor says she found it so "absurd" that she agreed to do Rashmi Rocket, a film that questions the practice through the inspiring story of a sprinter.

Pannu, an avid sports enthusiast, went through intense physical training to do justice to her role of a runner, whose life is thrown off track when she is accused of lying about her gender.

"There was the fact that I'm so much into following all kinds of sports, how did I not know about something so absurd happening? And it's been happening for decades and as latest as this Olympics. So it was very shocking for me to know.

"How crazy is it that someone else will tell you if you are a woman enough or not. It's almost like an identity crisis situation where you have to prove your womanhood to be able to participate in a tournament you really train your life for. We are talking about going to Mars and all that. Surely, there is a better way to discover that and not a gender test, which only happens for females," Pannu told PTI in a Zoom interview.

The actor, known for her critically-acclaimed roles in films such as Pink, Mulk, Manmarziyaan and Thappad, said she gravitates towards stories that question the status quo.

"Something that is happening around and nobody's questioning the logic of it makes me feel like maybe I should bring it up in the mainstream for people to start seeing it from a different point of view which they haven't seen till now...

"Whenever I get an opportunity with a script or story that makes me think from another point of view, I feel like this will be interesting. All of us somewhere have gone through something similar, if not the exact same and we also let it go thinking it's normal," the actor said, adding that such stories help her connect better with the audience.

Rashmi Rocket draws inspiration from not one but many women athletes who are subjected to the archaic but widespread practice of gender testing in sports. There are many real-life examples such as South African athlete Caster Semenya, Indian athlete Dutee Chand, and Spanish hurdler Maria Jose Martinez-Patino who have faced roadblocks in their careers due to such tests.

In the film, Pannu's character Rashmi goes through something similar when her gender identity is questioned and fingers are pointed at her for not fitting into society's idea of a woman.

The actor said it is nothing but an extension of stereotyping a woman where she is questioned for her body language or for having muscles.

"There is this tendency to box you in but there is no logic behind it. Just because it has been going on for years and years, you continue going ahead with this and if you question that, you are considered to be the troublemaker," she said.

Pannu said she wanted the story of Rashmi Rocket to focus only on the battle that her character goes through rather than delving into the familial struggle, which is why her character has a strong support system in her father, mother and husband.

"In this particular film, for example, we did not really want to show the personal battle in terms of the family not supporting an athlete or an athlete not being rich enough to afford certain kinds of facilities. That has been discussed and shown a lot previously, that was not the agenda.

"That's why we avoided tropes like family not being supportive. That really helped us show things which are not commonly shown in sports-based films."

The film was supposed to be shot and arrive last year but the pandemic delayed its release.

Pannu, 34, said though it's a coincidence that the film is releasing now, she is happy about the timing as people are already keen to know about more sports beyond cricket "because of the kind of performance we've had in the Olympics, the awareness has gone extremely high".

She is also set to star in Shabaash Mithu, a biopic on Indian cricketer Mithali Raj, to be directed by Srijit Mukherji. Pannu has previously played a hockey player in Soorma, featuring Diljit Dosanjh in the role of real-life hockey player Sandeep Singh.

The Kutch-set story, produced by RSVP and Mango People Media, has been written by South filmmaker Nanda Periyasamy, Aniruddha Guha and Kanika Dhillon.

The film is set for a digital premiere on ZEE5 on Friday.