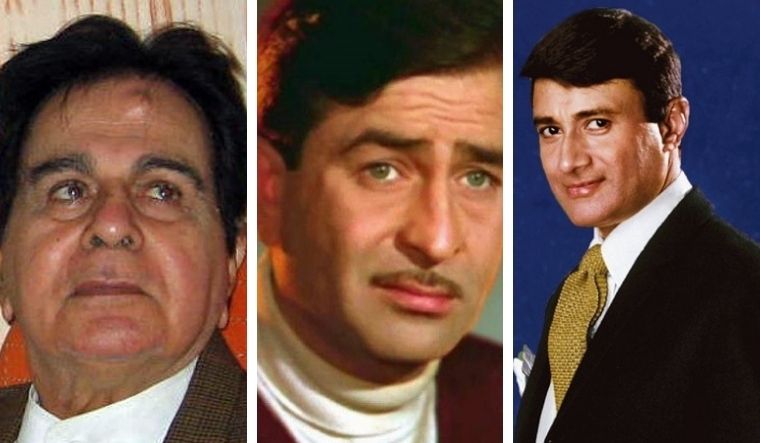 Any conversation on Dilip Kumar is almost incomplete without the mention of Dev Anand and Raj Kapoor. The golden trio, as they were known, are the best Hindi cinema has seen and will continue to inspire actors for generations to come. In an article he wrote for a newspaper after the demise of Dev Anand in December 2011, Dilip Kumar did not refer to both actors as rivals, but contemporaries. This camaraderie proves why the three of them are often discussed in the same breath, even today. The three of them started their acting careers almost at the same time in the 1940s. Because they differed extensively from each other in their acting styles, it was easier for them to co-exist, peacefully.

Kumar cemented his position as the king of tragedy, Kapoor followed Charlie Chaplin, and Anand with his characteristic head-nods was the charmer akin to Gregory Peck and Cary Grant. Dilip Kumar, once wrote, “He (Dev Anand) had devastating looks and a smile which till date no other actor has.”

Kumar has on multiple occasions, in his write-ups and social outings, opened up about the void the demise of his contemporaries created in his life. Rishi Kapoor fondly wrote about the friendship that his father Raj Kapoor shared with Dilip Kumar. He talked about the time when he was still a kid and Kumar would come to their house to spend some time with Kapoor. “Yousuf uncle [Dilip Kumar's original name] and papa shared an eternal fraternal friendship,” he wrote in the Reminisces section of Kumar’s autobiography. “At home it was like a celebration when papa and Yousuf uncle got together. Since both loved food, my mother would be scurrying around from morning telling the cook what to prepare for lunch and then tea. Papa would be waiting all fresh and scrubbed and ready in his Pathan attire like an excited child.”

In the same section in The Substance and The Shadow, Sharmila Tagore, however, takes a more practical approach while talking about the trio, and the fact that Kumar never took to producing films like the other two and also stuck to doing only one film at a time quite early in his career. “Most of his contemporaries were working in multiple films at the same time. Since Dilip Kumar was not a director-producer like Raj Kapoor and Dev Anand, this strategy might have seemed foolish to many, but it speaks volumes of Yousuf Sahab’s absolute confidence in himself. He was an actor first and foremost and not a businessman.”

Such comparisons could have led many astray, but the three maintained the strong bond. In a tribute to Dev Anand, Dilip Kumar wrote about one of their most “important visits” together to see Pandit Jawaharlal Nehru. The photos of which still comes up the moment you Google the names of any two from the trio. Later, in the autobiography, he would mention the name of his two contemporaries in the same paragraph as his brothers—Noor Sahab and Ayub Sahab—and write, “I miss them as much as I miss my own brothers who are no more.”