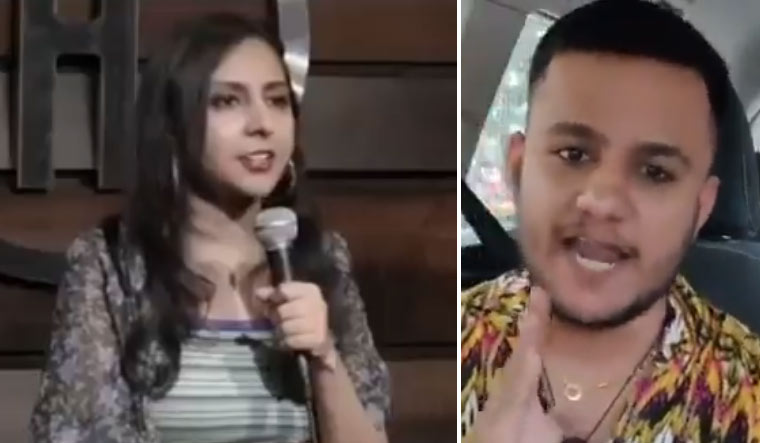 A year-old clip of stand-up comedian Agrima Joshua has sparked controversy on social media, after a segment she did on Chhatrapati Shivaji was deemed offensive by some, prompting a popular YouTuber to make a lengthy and explicit rape threat against her and the Maharashtra Home Minister to call for legal action to be initiated against her.

In the now-viral clip, Joshua can be seen joking about the proposed statue of Shivaji to be constructed off the Mumbai coast. In the bit, she jokes about Quora posts with false claims about the statue, including that it would have enough solar cells to power Maharashtra, or lasers to shoot terrorists in the Arabian Sea. At the end of the clip, Joshua added that she hates doing political comedy.

The clip saw many react furiously to a perceived slight to Shivaji. The cafe where the stand-up bit occurred has also reportedly been vandalised.

Dear @CMOMaharashtra stand up Comedian @Agrimonious cracked jokes and made fun of Chatrapati Shivaji Maharaj
She has hurt feelings of crores of Maharaj devotees across the globe
Please take strictest action against her
CC @AnilDeshmukhNCP @CPMumbaiPolice @MumbaiPolice pic.twitter.com/Qg2CdX1x7U

Former Shiv Sena member Ramesh Solanki posted the clip saying, “Dear @CMOMaharashtra stand up Comedian @Agrimonious cracked jokes and made fun of Chatrapati Shivaji Maharaj She has hurt feelings of crores of Maharaj devotees across the globe Please take strictest action against her,” tagging the Maharashtra Home Minister and the Mumbai police.

Solanki also called for action against Vir Das, sharing a clip of Das poking fun at WhatsApp forwards talking about the proposed statue.

Joshua has since issued an apology for the segment on Twitter and taken her own video of it down.

While numerous accounts took umbrage at the clip, one particularly graphic reaction has shocked many.

With nearly 3 lakh followers on YouTube and over 35,000 followers on Instagram, Mishra issued a series of graphic threats to Joshua in his video, threatening sexual assault and urging his followers to "teach her a lesson".

He has since taken down the video, issuing another video saying it was not his intention to make such threats.

Comedian Kunal Kamra was among those to share Mishra’s video, calling on the National Commission for Women to take cognizance of the threat.

“Dear @NCWIndia does this concern you, we see this scumbag give open threats to a female comedian who has already apologised & taken her objectionable video down...”

Dear @NCWIndia does this concern you, we see this scumbag give open threats to a female comedian who has already apologised & taken her objectionable video down... pic.twitter.com/c7OiHf0yUl

The NCW noted Kamra’s tweet, and has since sought immediate action from the Gujarat police against Mishra.

“The NCW is committed to creating safe online space for women and ensuring cyber security to women and is perturbed by the rise in use of cyberspace to instigate crime against women," NCW Chairperson Rekha Sharma said in a letter sent late Saturday night to Gujarat Director General of Police (DGP) Shivanand Jha,.

"Considering the sensitivity of the matter, it is requested that the immediate action shall be taken as per the Information Technology Act, 2000, against the miscreant and a feedback be apprised to the Commission," Sharma said.

“Chhatrapati Shivaji Maharaj taught us to respect women.But if someone is using/threatening the wrong language about women, then there is a law for them,” he tweeted, asking the Maharashtra Police cyber cell to verify the video and for the Mumbai Police to take “appropriate legal action against the person in the video as per the rules,” Deshmukh tweeted.

Joshua too faces the threat of legal action. Deshmukh had earlier tweeted in response to the clip of her stand-up bit, saying, “I ve instructed CP Mumbai and IG Cyber to take legal action expeditiously ..I urge everyone to maintain calm and law will take its course.”