He donated to the families of George Floyd, Ahmaud Arbery and Breonna Taylor 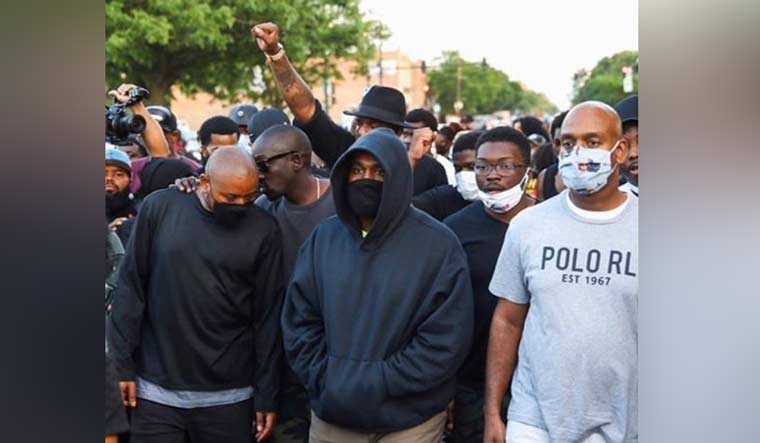 Rapper Kanye West, who had been criticised by some figures in the rap industry for not speaking out amid the George Floyd protests, has been spotted at a protest march in Chicago that was demanding that the city’s public schools cancel their contract with the Chicago Police Department.

West also donated $2 million to the families of George Floyd, Ahmaud Arbery and Breonna Taylor—all African-Americans who were killed in incidents of suspected racism—with the amount to go towards paying their legal fees. A representative for Kanye West also told CNN that the rapper had established a 529 education plan for Gianna Floyd, the six-year-old daughter of George Floyd. In addition, he has reportedly donated to African-American businesses in Chicago and nationwide.

Not only did Kanye West donate $2 million, he also joined protests today in Chicago. pic.twitter.com/bTeFPFNAGz

West was seen in a black face mask at the protest. His arrival came after many questioned the usually outspoken rapper’s absence from the #BlackLivesMatter protests. Music executive Ebro Darden even tweeted on June 4 asking, “And furthermore why is Kanye so quiet?”

West at one point was among the most prominent of US President Donald Trump’s supporters, visiting the White House with a red ‘Make America Great Again’ mask where he had a friendly exchange with the president. Since the incident, he grew less vocal about his support for Trump, but as early as April, told GQ magazine “you know who I’m voting for”.

While West was heavily criticised for meeting with Trump, he used the occasion to ask the president in person to do away with Chicago’s controversial “stop-and-frisk” police powers, besides urging the president on issues like prison reform and setting up more mental health institutions.

West’s actions come amid nationwide protests that had been raging for over two weeks and that only recently showed signs of abating in intensity. The protests were sparked by the death of George Floyd, who was arrested by the Minneapolis Police for allegedly handing over a fake dollar bill at a local convenience store. Floyd was pressed to the ground by Derek Chauvin, an MPD police officer, who pushed his knee into Floyd’s neck for over eight minutes—suffocating Floyd, who eventually died. Four officers of the MPD have so far been arrested in connection with Floyd' killing. Chauvin faces charges of second-degree murder.

The entire incident was captured on video and sparked some of the largest protests seen in the United States in recent times, as African-Americans and allies took to the streets in protest against racism.

Ahmaud Arbery was an African-American man who was shot dead in February by two men while jogging in a Georgia neighbourhood. The two shooters included a former police officer.

Breonna Taylor was a 26-year-old African American woman who was shot dead by Louyisville Metro Police Department officers in Kentucky, after they entered her apartment in plain-clothes on a “no-knock warrant”—which allows law enforcement to enter a building without alerting its residents.