'A Minor Inconvenience': Of family, death and life's subtle ups and downs

Director Krishand R.K. on his debut movie which had its world premiere at IFFK 2019 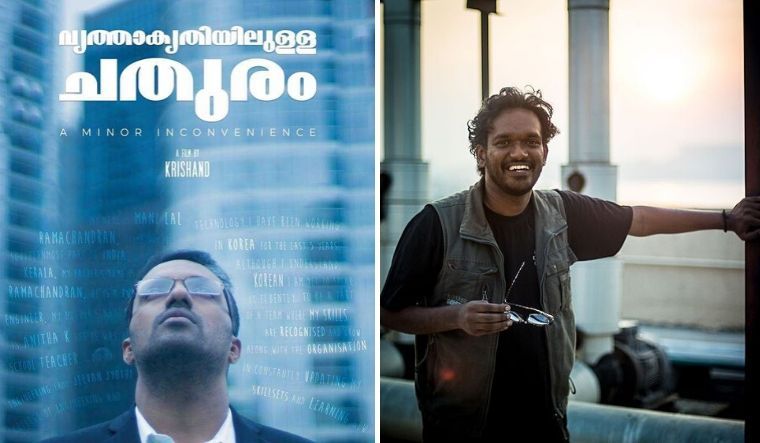 For young director Krishand R.K., cinema is nothing but an amalgam of different aspects of design, emotion and experience. His first film A Minor Inconvenience – Vrithakrithiyilulla Chathuram is competing in the ‘International Competition’ section of the 24th International Film Festival of Kerala (IFFK). Krishand shares his experience and his journey in the film field.

Your first film is competing in IFFK’s international competition category. How do you feel?

For me, all these unfolded unexpectedly. Though I am trying to underplay the whole level of excitement, in reality, we are all overwhelmed. I think emotions of surprise and overwhelm have truly overtaken the entire crew.

What is A Minor Inconvenience all about?

The story is centered on Manilal Ramachandran, an introvert who experiences a trauma in his childhood. Later, while he is working abroad, his father dies and on returning home, everything that he needs to deal with turns out to be minor inconveniences for him. How he escapes from these inconveniences is what the film is all about. It deals with the subtle realities of life like death, parents and relationships.

With Jallikattu as a stiff competitor for the title, is there a tension in the air?

Of course not. Getting into IFFK’s category of Malayalam films was what we intended. But our film got selected in the international competition category, which in itself is a major victory. I am a great fan of Lijo and in every aspect Jallikattu is a brilliantly crafted movie. When our movie is featured along with such a highly valued movie, it brings about a lot of validation to what we have made. It will spur an interest in people to watch our movie for the very fact that it has competed with Jallikattu.

How was the response for the film at IFFK?

A lot of people whom I did not know personally messaged and called me to congratulate. I could say that it was the common man who loved the film. But there were some who did not like certain parts of the film. There are certain areas which are completely based on one’s mental morale, upbringing and experiences which everyone cannot relate to. Thus, some felt that there was a lot of communication happening in the film. But, what everyone captured with delight was the slight gentle elements of dark humour that persists along the entire length of the film. It was intentionally designed and when people respond to that designed humour, it becomes a moment of joy.

About the film not being taken for a theatrical release?

There are certain areas in the film, where for some moments, people are entertained and the next thing that happens is a transition to an emotionally collective mood which some people cannot relate to. I do not want a person who comes in for a weekend movie just to relax to go through this experience. On the other hand, motivated audience will definitely come. For them instead of a theatre experience, an online platform will suit more. When interested, they can watch and if felt disconnected, they can set it aside for a later time. That is how the film is designed. Currently, talks for the film to be aired via online platforms are in the process.

How has a film festival like IFFK influenced film lovers out there?

This year, though I was not able to view much, from what I have viewed, I could say all films were emotionally connective. These film festivals bring together different international films to the spotlight and when exposed to such pieces of art, it truly opens our eyes. And, it is not just us, but even people from remote areas are flocking to the festival to relish this global experience. They go back inspired and return with honest content to be featured in these festivals. For me, these festivals are springboards for people where they are exposed to the changing mode of visual communication.

Your journey as a director.

I have always wanted to tell stories. Eventually, I figured out that the way to do this was through comic books. I made short comic books, only to find them being not sold in the market. Then I figured out that cinema was the path to achieve my dream and fortunately it has worked well. I experimented a lot along the journey and it has reaped success as well. My short film Sinners at the Goddess Abode was screened at the 2016 Cannes SFC. My web series titled Utsaha Itihasam – Saga of the Spirited won the Best Comedy Drama at Seoul Web Fest. Also, Waterbodies, a short documentary was screened at this year’s IDSFFK.

How do you view film as an art form?

Anything that can be documented is the conventional aspect of film. But for me, film is art as well as communication. It is expression as well as design. In a way, it is a conglomeration of different aspects of design, emotion and experience.