Kollywood in 2018: From '96' to 'Pariyerum Perumal', here are five best Tamil movies of the year 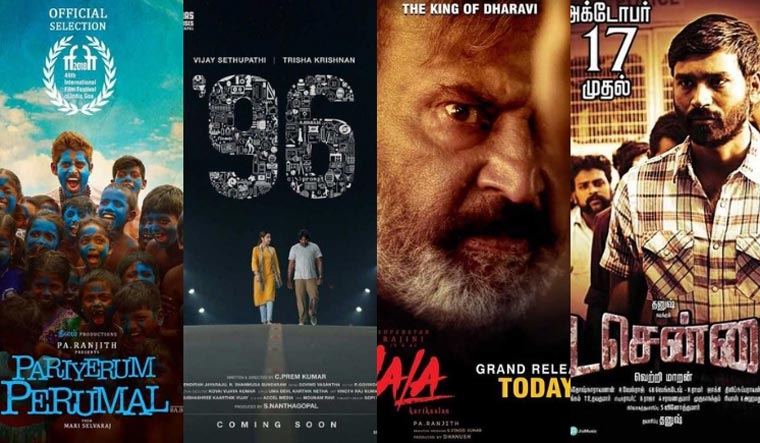 It is safe to say that 2018 was a huge year for Kollywood as the year witnessed some of the biggest releases in the recent times. One of them was 2.0, the sequel to 2010 superhit Enthiran. Unlike the previous years, when Rajinikanth fans had to be satisfied with one release of their superstar or even no release at all, 2018 had two films of the actor—Kaala and 2.0 hitting the screens. Some of the other major releases of the year included Sarkar, Vishwaroopam 2 and Saamy Square. Here we take a look at five films that managed to impress both critics and regular cine goers alike.

The teaming up of two of Kollywood's versatile actors—Vijay Sethupathi and Trisha Krishnan—had generated much interest even before the release of this romantic comedy directed by first-timer C. Prem Kumar. And the two did not disappoint as Ram and Jaanu touched the heart of audience in a way few characters could.

Ram (Vijay Sethupathi), a photographer of few words, gets a chance to reconnect with his school friends when he makes an impromptu visit to his school, and they decide to have a reunion. When Ram meets his first and only love Jaanu (Trisha) after a gap of more than 20 years, he realises that he is still that teenager, madly in love with Jaanu. The scene soon shits to their school days, giving the viewers a fine nostalgic trip.

96 was one of the most successful movies of the year with the reviewers praising the performance of the lead pair, the music and cinematography.

Pariyan (Kathir), who belongs to an oppressed, backward caste, dreams big. He wants to be a lawyer and make things better for people of his community. He manages to secure a seat in a law college and moves to Tirunelveli. Pariyan falls in love with his classmate Mahalakshmi alias Jo (Anandhi) who helps him with his English lessons. Their relationship runs into trouble when Jo's family learns that Pariyan belongs to a lower caste.

Directed by Mari Selvaraj and produced by Pa. Ranjith, Pariyerum Perumal is a scathing opprobrium of caste system and the society that is blind to the evils perpetuated by this system. The film also brings to light the problems faced by students coming from rural background on 'quota' basis and also deals with college politics that is based more on caste and class than political ideologies.

After Kabali, the Rajinikanth–Pa. Ranjith team was back again in 2018 with another socio-political drama set in Mumbai. The film had the superstar donning the suit of a gangster (Karikaalan aka Kaala) who is a messiah to those around him. While Kaala does not mind flexing some muscle to mete out his brand of justice to those he finds are unjust, he is a gangster who lives by a high moral code. Pa. Ranjith pits Nana Patekar against Rajinikanth as the antagonist and the showdown between the two did not disappoint. The film had plenty of whistle-worthy moments, something that the fans were eagerly waiting for.

While being an out and out action drama, the film was also a critique of the socio-political scenario of the country even as it attempted to showcase the political inclinations of Rajinikanth. The movie succeeded in pleasing the die-hard fans of the superstar who were tad disappointed with the actor's previous venture Kabali.

There's a killer on the lose and the killer is targeting teen girls. As expected, the cops have no clue about the nature and motive of the murderer even as the killer keeps taunting the cops before committing a crime. It is now left to Arun (Vishnu Vishal), a sub-inspector, to piece together the clues and chase the killer before his next crime. Arun was an aspiring filmmaker who used to watch one too many thriller films about serial killers and he puts to use the insights he gained from watching these movies to catch the killer. This cat and mouse game turn deadly as the killer targets someone who is close to Arun.

While the premise of the film may be as old as hills, Ratsasan, directed by Ram Kumar had plenty of edge-of-the-seat moments, keeping the movie goers glued to the screen. The pace, regular twists and the action sequences in the climax ensured that the few flaws in the script are overlooked and the audience got their moolah's worth of thrilling moments.

'Vetrimaaran's brilliance' works again as the director delivers another brilliant film about life and times of criminals. After the critical acclaim and praise their earlier ventures—Kodi and Aadukalam—managed to garner, Vetrimaaran teamed up again with Dhanush to come up with another blood-socked drama about gangsters and politicans. The Visaaranai directors recreated the Chennai of 1980s till 2000s to trace the rise of Anbu, played by Dhanush. The movie also stars Andrea Jeremiah and Aishwarya Rajesh in the lead roles.