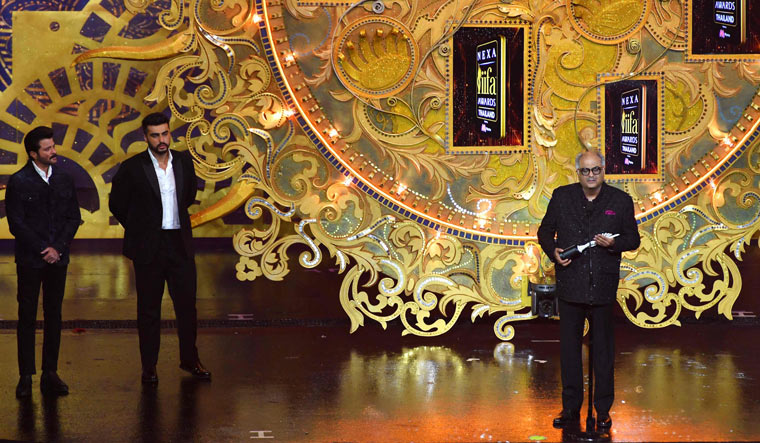 Actor Irrfan Khan and late veteran actress Sridevi were named the Best Actors at the 19th edition of the IIFA Awards, for their remarkable work in films Hindi Medium and Mom respectively.

At a grand event on Sunday here at the Siam Niramit theatre, a story of an ambitious and enterprising housewife, Tumhari Sulu bagged the Best Picture honour, while Saket Chaudhary took back the Best Director Award.

Late Sridevi's husband-producer Boney Kapoor took the award for her performance in Mom. He was emotional as he received the award from actress Kriti Sanon.

"I dedicate this award to the entire team of Mom," said an emotional Boney.

Vinod's award was accepted by veteran filmmaker Ramesh Sippy. Rishi Kapoor took Shashi Kapoor's award. While actor Anil Kapoor and Boney broke down in tears while talking about Sridevi at the gala.

"I have mixed emotions today. I miss her every minute and second of my life. I still feel she is around here....I want you all to support Janhvi like you supported her mother..." said a teary eyed Boney.

"It is a great feeling when your own peers celebrate your achievements and as I have been saying, this is just the interval point of what I am doing and my seconds half of journey starts now. It started with my 500th film....I told myself this is the interval point with The Big Sick and after that I have done 15 films in the last one year both international and national," said Anupam told IANS.

The 2000-seater Siam Niramit theatre saw thousands of Bollywood fanatics coming to the event to catch a glimpse of their favourite stars.

A string of A-listers like Ranbir Kapoor, Varun, Arjun, Kriti Sanon, Bobby Deol and Shraddha set the stage on fire with their power packed and electrifying performances.

Kriti, Arjun and Shraddha also danced to tracks from their films respectively.